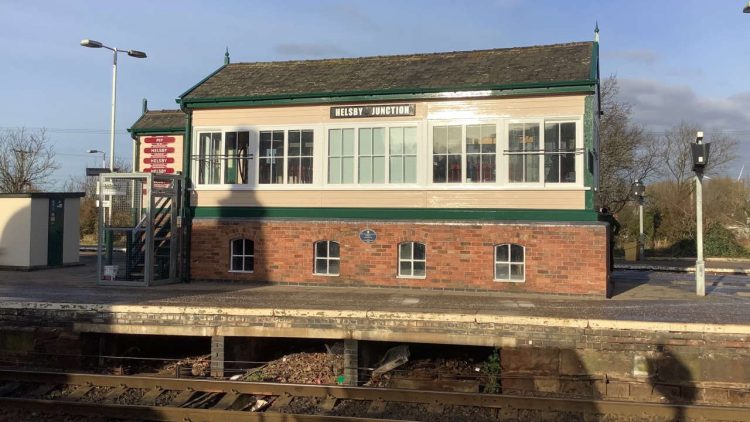 The Grade II-listed Helsby Junction signal box in Cheshire has been upgraded as part of a £65,000 investment in the railways in northern England.

The 122-year-old signal box is on the line from Chester to Manchester and Ellesmere Port.

Its wooden frame, outside cladding, and electronics have been refurbished, and it has a new roof and windows.

To improve the conditions for railway staff working there, an upgraded kitchen and heating system have also been installed.

Helsby Junction is a Grade II listed structure as it is a good example of the typical form of the London and North Western Railway Type 4 signal box. It also retains the original lever frame, and also complements the Grade II listed station buildings and waiting shelter which were both built in 1849.

The box was built in 1900 to replace an 1870s signal box on a slightly different site, and is on the island platform at Helsby station. It had previously been extensively renovated in 2003, for which it won a National Railway Heritage Award in 2004.

The London and North Western Railway initially employed signalling contractors Saxby and Farmer to manufacture its signalling equipment, including signal boxes. From 1874, the production of new signalling equipment was taken in-house at the company’s main engineering works at Crewe. The first design was known as the LNWR Type 3, but this was quickly replaced by the Type 4, such as at Helsby Junction, by 1876.

Liam Diviney, project manager for Network Rail, said “We take great care to maintain heritage structures on the railway and the signal box at Helsby is no exception.

“This historic signal box has been restored to its former glory as part of a £65,000 North of England railway investment. This will secure future journeys for passengers and freight between Manchester, Chester, North Wales, and the Wirral for decades to come.”

To read more about how Network Rail looks after its heritage structures, visit http://www.networkrail.co.uk/who-we-are/our-history/working-with-railway-heritage/