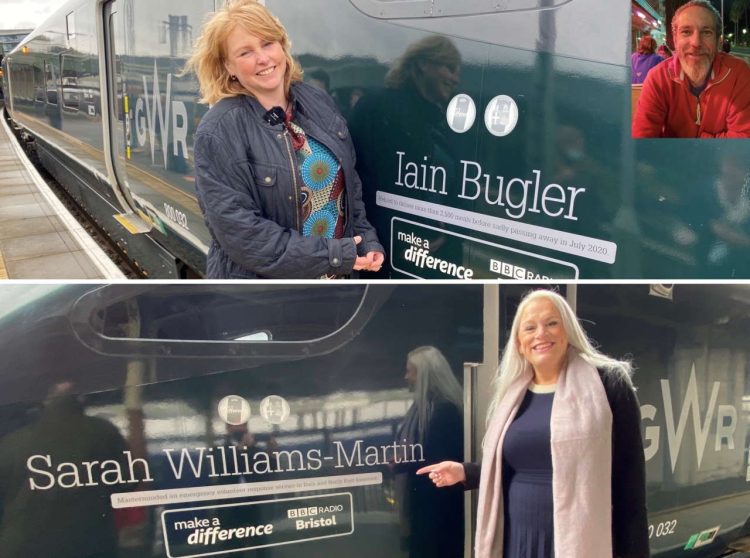 Great Western Railway (GWR) has named a train after two community heroes from BBC’s Bristol region who selflessly helped others at the height of the Covid-19 pandemic.

Nailsea Support Group volunteer Iain Bugler and emergency volunteer response mastermind Sarah Williams-Martin BEM were chosen as BBC Make a Difference Superstars following a link-up between the BBC and GWR to celebrate those people going above and beyond to help others in their communities.

Their names were unveiled at a ceremony at Bristol Temple Meads on 28th February and now feature at each end of Intercity Express Train 800032, as GWR continues to honour BBC Make a Difference Superstars from nine regions across its network.

Nailsea Support Group volunteer Iain Bugler , who sadly passed away in July 2020, and emergency volunteer response mastermind Sarah Williams-Martin BEM were chosen as BBC Make a Difference Superstars. He joined the Nailsea Support Group and with the help of local businesses launched a hot-food delivery service for those in need. From 70 meals a week, the operation soon increased to 250, and by the end of the first lockdown, over 2,500 meals had been delivered.

Iain had just completed chemotherapy and radiotherapy treatment when coronavirus restrictions were introduced in March 2020. He required further treatment that summer and sadly developed pneumonia, passing away on 1st July, aged 51. His widow Kate attended the naming ceremony accompanied by their children James, Edward and Grace, plus other family and friends.

“It is truly remarkable that having been through so much himself, Iain joined the Nailsea Support Group and played such a key role in supporting our community through that first lockdown. This posthumous tribute by GWR and BBC Radio Bristol is truly fitting for Iain, and I’m pleased his contribution is being recognised in this way.”

Sarah Williams-Martin, from Melksham, voluntarily managed the Compassionate Community Emergency Volunteer Response in Bath and North East Somerset at the height of the pandemic. She was awarded the British Empire Medal in the Queen’s New Year honours as a result of her unstinting work. She was joined at the unveiling ceremony by her husband Christopher.

Sarah built a database to manage the 2,500 volunteers who signed up, and were matched to support people during Covid-19. 85,000 leaflets were sent out to raise awareness of the help available, and which helped over 4,000 individuals and families get essential food and medication.

“Our communities came together during lockdown because of people like Sarah and it is because of them that we have managed to get through these very difficult couple of years. In addition to her very well-deserved BEM, I’m so pleased that her huge contribution is being marked by GWR and BBC Radio Bristol.”

“Iain and Sarah went to incredible lengths to support their communities and we’re honoured to add their names on to the side of an Intercity Express Train.

“The GWR has a long and proud history of naming trains after Great Westerners – past and present heroes from across our network – and it’s especially poignant that we’re able to add these two community stalwarts to that list.

“We have been amazed by the response of many listeners to our Make a Difference campaign on Local BBC Radio, as listeners have been helping each other out throughout the pandemic.

“It has been humbling to learn about the kind-hearted efforts of so many in our communities and Iain and Sarah are great examples to the rest of us. Congratulations to them and to the team at BBC Bristol.”