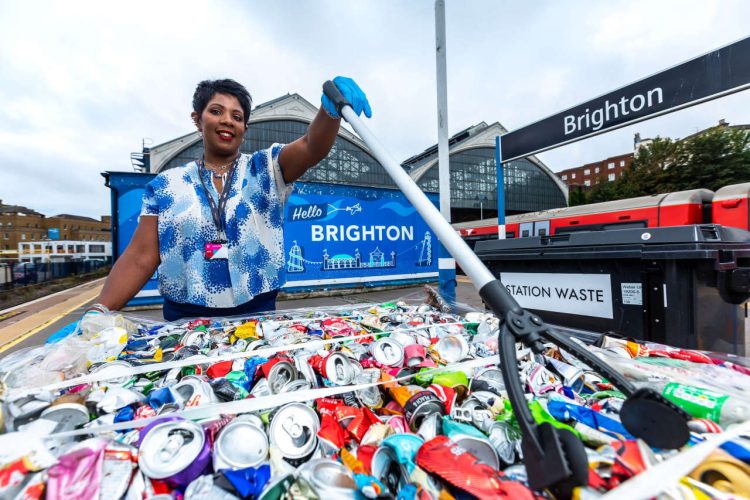 The impressive achievement is perfectly timed ahead of Global Recycling Day on Friday the 18th of March. The achievement comes as a result of an excellent partnership with waste management start-up The Green Block.

Following the installation of a Mobile Segregation Unit (MSU) at Brighton station during September 2021, the facility has saved more than 160 tonnes of waste from being incinerated – the equivalent of 32 elephants!

If this rate of successful recycling keeps going, Govia Thameslink Railway (GTR) which run Southern, Thameslink and Great Northern rail services, anticipates that more than 320 tonnes will be recycled at Brighton Station during 2022.

GTR has the ambition to provide the highest rate of recycling for any station on the rail network and has increased recycling rates to 90% in just six months in comparison to just 30% before the installation of the MSUs.

Staff at The Green Block’s facility separate, wash, compact, bale, weigh and electronically tag all of the waste from Brighton station and also all of the Southern and Thameslink trains which run to and from the city.

“We’ve made a commitment to the UK’s green recovery which means seeking out innovative solutions to deal with waste. Prior to the pandemic, around 12% of the total waste collected across GTR’s 800-mile network came into Brighton. As lockdowns and restrictions have seen fewer people travelling, this has reduced to 5% but is steadily on the rise as the country adapts to new ways of working. With this scheme, we’re achieving zero to landfill, with any waste that cannot be recycled turned into energy.”

“It’s brilliant to see the impact the new Mobile Segregation Unit at Brighton station has already made with 90% of 190 tonnes of waste being recycled or composted. This is a great example of how small changes can make a huge difference – and quickly!

“I’m proud that so many businesses in Brighton are stepping up and making their systems and practices more sustainable, despite incredibly challenging circumstances, and I wholeheartedly support GTR’s aim of delivering the highest recycling rate of any station on the rail network,” she added.

“I was lucky enough to visit Govia Thameslink Railway’s Mobile Recycling Unit and was impressed by the sheer quantity of waste that was being recycled in such a relatively small space. To recycle over 90% of all the waste that is produced in the station and arrives on trains in Brighton station is a fantastic achievement and we are delighted to have this unit here doing such great work for the city and our environment”

“Our cutting-edge tracking technology, alongside the fantastic people who work in our MSUs, supports companies like Govia Thameslink Railway to achieve their ambitious environmental goals.

“Our technology-based process allows us to create a digital footprint for producers of waste. This means they can precisely measure, in real-time, with our innovative dashboard, the source of the waste, its type and substance and weight, and ultimately what gets recycled.”

The MSU in Brighton is just the second of its kind on the UK rail network, one was also installed at London Victoria by Network Rail in June 2020.

Network Rail has completed work between Dorridge and Birmingham Moor Street to ensure a more reliable railway before...