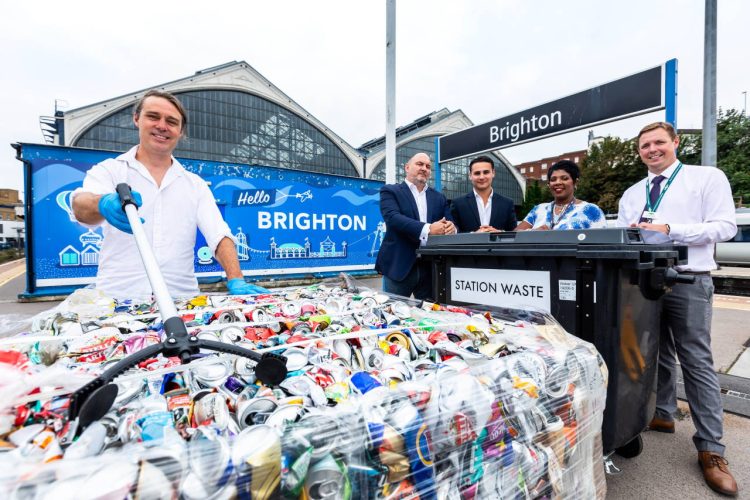 Govia Thameslink Railway, as part of National Recycling Week, which runs from the 20th – 26th September, has unveiled a new initiative in Brighton.

GTR wants to increase recycling rates at Brighton station to 95%, its current average over the last year has been 30%. Helping to reach this target is a Mobile Segregation Unit, which has been installed at the station.

At the moment, 12% of the total waste collected on the Govia Thameslink Railway’s 800-mile network comes from Brighton, producing 650 tonnes of rubbish.

The new machine will segregate, wash, compact, bale, weigh and electronically tag all waste from the station, as well as all rubbish collected from trains running to and from the city, all thanks to a new partnership with sustainability start-up, The Green Block.

Since being installed last month, the MSU has already prevented 32 tonnes of waste going to be incinerated, and if rates remain at the same level, the machine will recycle 400 tonnes of waste between now and and September 2022.

The new machine is the second of its kind on the UK rail network, with the first installed at London Victoria in June 2020.

Govia Thameslink Railway’s Infrastructure Director, Keith Jipps, said: “Brighton station’s MSU will be one of several major sustainability successes across our network and we are delighted to have seen a phenomenal increase in the station’s recycling rate in this first month.”

Jamie Lloyd, Councillor in Withdean ward, Brighton and Hove said: “It’s fantastic to see this facility in action and to see so much recycling happening here in Brighton station. I’m amazed at how small the footprint is, that they are already recycling 91 per cent of waste and aiming for even higher. It’s a brilliant opportunity for Brighton and Hove and Govia Thameslink Railway.”

Josh Katz, Client Services Manager from The Green Block, added: “Everyone at The Green Block (TGB) is delighted to be working with Govia Thameslink Railway to support this forward-thinking, innovative approach to waste, delivering world class recycling rates.”