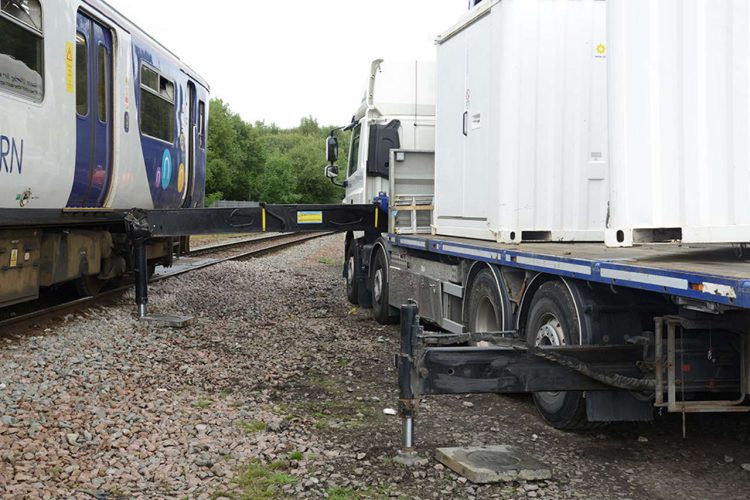 The Rail Accident Investigation Branch (RAIB) have released a safety digest after an incident involving a train and a lorry at Penistone earlier this year.

The accident took place at 8:48am on the 27th of August with train 2B07, the 8:12am Northern Service from Huddersfield to Sheffield reporting striking of a stabiliser leg of a lorry parked next to the track.

The train was travelling at 20mph (32km/h) when it hit the stabiliser leg with the accident taking place around 0.3 miles (0.5km) south-east of Penistone station on the line between Huddersfield and Barnsley. The lorry was using its crane to move a portable toilet onto its flatbed, with the stabiliser legs deployed to enable the lift.

Following departure from Penistone station, the train was accelerating and had reached 27mph (43km/h) when the lorry became visible. The driver spotted a person close to the lorry and sounded the horn to provide a warning. The stabiliser legs were not visible to the driver at that time and continued to accelerate.

As the train drew closer to the lorry, the train driver could see that one of the stabiliser legs was extremely close to the rails and applied the brakes and just 5 seconds later the train struck the lorry. The train crew and 25 passengers were unhurt by the collision, however, the lorries stabilising leg was damaged during the accident and the train’s front and side also suffered some damage.

Once the train was able to stop, the driver carried out an emergency call to report the accident. Later, the train was moved to Barnsley where passengers continued with their travel.

The Cause of the Accident:

The accident took place in an area within the railway boundary which had been used by the Central Rail Systems Alliance (CRSA) as a base for track renewal work. CRSA is an alliance between Network Rail and a group of three contractors and is responsible for development, design and delivery of track renewals as part of a ten-year contract. The track renewal work that was utilising the Penistone site had been carried out from Friday the 6th of August to Monday the 9th of August.

CRSA were in charge of site management at Penistone and had used a contractor to organise for two portable toilet units to be delivered to the site on the 30th of June. As track renewal work completed, CRSA started to clear the site and organised for the portable toilet units to be collected by the contractor on the 27th of August, the contractor then subcontracted to a haulage company to collect the units on their behalf.

The driver arrived to collect the portable toilet units at 8:32am on the 27th of August, parking near the access gate on the Penistone site. The lorry driver met with a CRSA staff member who had been asked to allow the lorry access onto the site after confirmation that the lorry was in the correct location. The lorry driver drove into the site via the open gates and parked so the portable toilet units could be lifted onto the flatbed of the lorry. Once parked, the lorry driver deployed the stabiliser legs to allow the use of the crane. The first unit was lifted successfully onto the lorries flatbed with the second just about to be lowered into place when the train approached, striking the nearside stabiliser leg.

Consideration of the distance of the stabiliser leg to the nearest running line had not been given by the lorry driver with witness marks and measurements on the ground revealing that the base of the stabiliser leg was in fact at the end of the sleepers, just 0.5 metres from the closest rail. The lorry driver had no previous experience of working in close proximity to an open railway line and also believed that no trains were operating as they had been given access straight onto the site by the CRSA staff member and later confirmed that he was unaware that trains were running.

The CRSA staff member was a key holder for the access gate for the site and had been told the previous evening to arrive at the site at 7:45am to open the gate to allow the lorry to collect the portable toilet units only. The CRSA staff member remained by the site gates when the train approached and did not realise how close the stabiliser leg was to the nearest running line.

According to the railway Rule Book, GE/RT8000, work taking place within the railway boundary fence that is more than three metres from the nearest running line and can be seen by the driver of an approaching train is defined as being on the ‘lineside’. A new version of the Rule Book is due to be published in December 2021 and has simplified the definition of ‘lineside’ by removing the condition of being visible to the driver. If work is being carried out closer than 3 metres from the nearest running line, then the Rule Book defines this as being ‘on or near the line’.

The parked position of the lorry to remove the portable toilet units meant that it was ‘on or near the line’. The Rule Book requires that a Controller of Site Safety (COSS) be present before a road vehicle can go ‘on or near the line’. The CRSA staff member on-site held Personal Track Safety competency (PTS) but there was no COSS competency represented at the time of the accident. The Rule Book also requires that no part of a road vehicle should be permitted within 2m of any line which a train may approach and in this case, one of the stabilisers legs was a great deal closer than 2m and was actually foul of the nearest running line.

The contractor who supplied the portable toilet units had used a generic method statement and lifting plan for the collection of the units, which included a hazard analysis section with a checklist of hazards to consider. The method statement also included a risk assessment for the identified hazards, each hazard was allocated a risk score (its likelihood multiplied by its severity) and a control measure to bring down the risk. ‘Railways’ was part of a possible entry on the hazard checklist, but was not selected for the work being carried out on the 27th of August and because of this, the contractor did not undertake a risk assessment for working close to a railway line. The method statement also made no further mention of working close to railways and featured no requirements as to what levels of supervision, experience or competence were required.

CRSA had undertaken a Balfour Beatty procedure for managing visitors on its sites with the procedures main purpose being to define and monitor health and safety controls relating to visitors of CRSA offices, depots and facilities and to make certain those accessing these sites were not put at risk. The procedure for managing visitors states that all visitors must sign in, wear appropriate PPE, be given a visitor’s induction, and always be accompanied by a fully inducted person and also included a section for visitors who needed to go ‘on or near the line’.  The procedure called for such visitors to hold PTS competency or to complete a medical self-assessment and also to obtain a Track Visitor Permit (TVP) with a COSS required to validate the visitor’s PTS or TVP, and establish a safe system of work, as laid out by the Rule Book and to meet the needs of the visit. None of these requirements were met when the lorry driver arrived to collect the portable toilet units on the 27th of August.