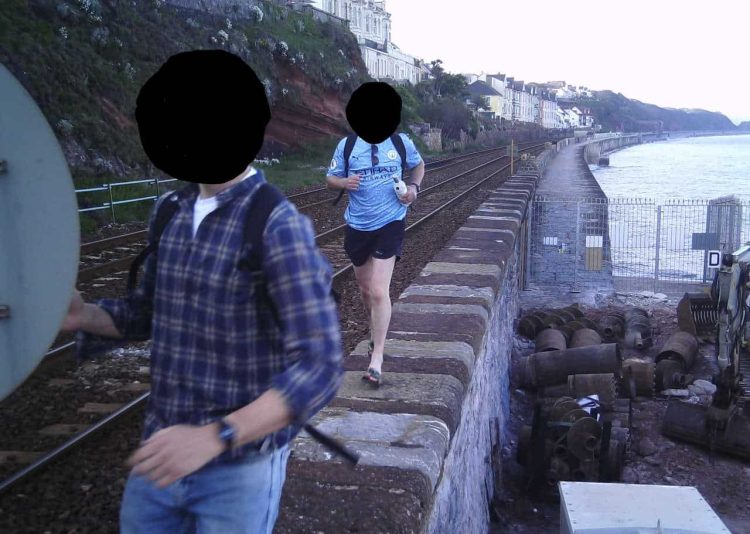 The British Transport Police have teamed up with Network Rail once again to issue a warning after a number of trespass incidents in Dawlish, Devon.

Network Rail is working on the new sea wall in Dawlish and has closed a footpath whilst work takes place. A temporary route has however been put in place between Dawlish and Dawlish Warren.

Since the footpath was closed, a number of incidents have seen people climbing on the all and walking next to the railway, where trains pass at up to 75mph.

In May, 18 incidents happened on the line and multiple people were caught on camera in the past few weeks.

In one of the instances, a person climbed on the wall with a dog (not on a lead) and caused a train to make an emergency stop.

Other incidents have seen people fall off the wall and need assistance to get off the tracks.

The BTP and Network Rail are now urging people to stay off the tracks.

Embedded Inspector Darren Burridge from British Transport Police said: “We see hundreds of people taking risks on and around the railway every year, resulting in tragic consequences or life-changing injuries. Both outcomes are avoidable.

“Our network of uniformed and plain-clothed police officers, and over 150,000 CCTV cameras, monitor the railway 24/7 – we will actively pursue and take positive action against those who fail to comply with the simple instruction not to trespass.”

Alison Kramer, Community Safety Manager for Network Rail’s Western route, said: “During the half term holidays at the end of May, Network Rail staff spent the week on the sea wall talking to visitors about the work, explaining the diversion route and providing everyone with maps, so I am appalled that this type of reckless behaviour is still happening.

“The diversion adds a few minutes onto the time it takes to walk between Dawlish and Dawlish Warren, is it really worth risking yours and other people’s lives for the sake of a few minutes?

“The diversion route is there to ensure the safe running of the railway and we urge everyone to observe it. I encourage anyone who may witness acts of illegal trespassing to report it the British Transport Police”