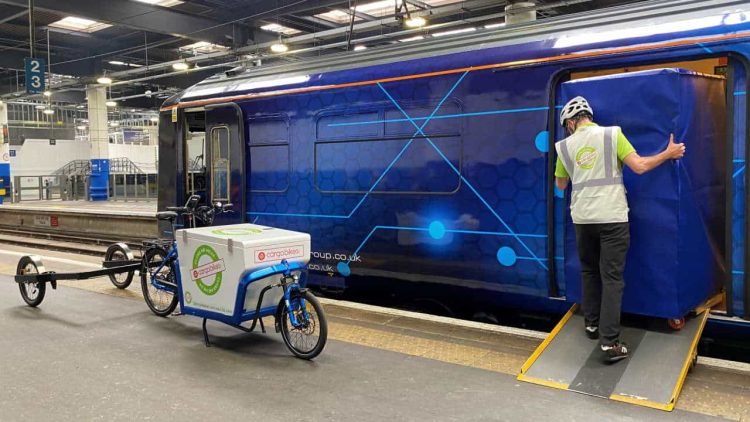 On Wednesday the 7th of July Network Rail and distribution company Orion demonstrated how high-speed parcel delivery needs could be met at city-centre stations in an innovative approach to the increased demand for goods to be delivered faster.

The new approach will be suited to online retail as well as offer a flexible freight option to transport light goods which are needed rapidly by businesses. When goods arrive at their city centre station, parcels would be delivered via bicycle or van couriers.

The train which has been converted was a class 319 and has now been updated to a class 769 which can run up to 100mph.

The train also now features a bi-mode which means that it can travel on both electrified and non-electrified rail.

The interior of the train has been re-fitted for logistics and can accommodate roll cages, pallets and other customer required vessels or containers with one carriage being able to fit virtually the same amount of goods as an articulated lorry.

Advantages of the scheme are the ability of trains to travel at speed of up to 100mph, which is much faster than the average road traffic speed. The converted trains will also be cleaner than both air and road haulage, able to access central city locations which are not always possible for other types of large scale rail and air freight. The trains can operate on both electrified and non-electrified rail and are easy to load and unload onto the chosen method of transport for the last arm of the journey.

The project has received interest from the UK’s largest parcel carriers as a high-speed logistics facility with the first service expected to start operating later in 2021 running between the Midlands and Scotland with more routes to be added in 2022 if there is demand and available rail paths.

Daniel Fredriksson, Network Rail customer relationship executive, said: “We’re excited to show what future uses rail has for distribution using Euston as a test site given its important history as a mail rail hub. While parcel trains are by no means a novel concept, more of us buying things online and efforts to get polluting vehicles off roads is revitalising rail as a cost effective and fast way to get goods to consumers and businesses quickly and efficiently.

“Network Rail has been working with Orion as it’s repurposing former passenger trains to serve this new purpose, while opening up the opportunities this has for economic growth as the country emerges from the coronavirus pandemic.”

Rail Minister, Chris Heaton-Harris MP, said: “It is really positive to see companies exploring innovative methods like this to transport rail freight. Repurposing former passenger trains will allow light goods to travel to consumers in a faster and greener way, helping to decarbonise our railway, reduce congestion on our roads, and support growth in the rail freight market.

“Through our reforms in the Williams Shapps Plan for Rail we are committed to unlocking the economic and environmental benefits rail freight can deliver, as we look to level up the country and build back greener.”

Last week, we were invited to Doncaster to see the unveiling of Eversholt Rail’s Class 319 train which has been converted for freight use. You can read all about the visit here