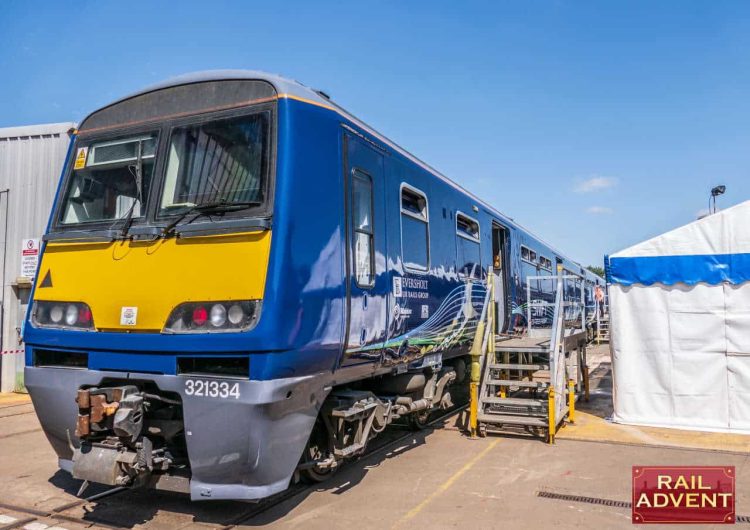 The conversion took place at Wabtec’s Doncaster Facility and saw a Class 321 passenger train, No. 321344, previously in service with Greater Anglia, converted to carry parcels around the UK.

Mark Smith introduced us to the day and went through the history of the Class 321s, with Wabtec still overhauling Class 3XX bogies, part of a contract signed in 2008.

Next up as part of the meeting was Paul Sutherland, who is Client Services Director at Eversholt Rail, who explained that the idea came around in 2019, with Class 321s about to start coming off lease and people starting to shop online more and more, more thought was put into the idea.

The Coronavirus Pandemic hasn’t changed this, and in fact, has accelerated the trend for people to be shopping online says Paul.

Paul says that customers want to deliver these parcels quickly and efficiently, which is where the idea of a Class 321 came into fruition.

When asked about why the Class 321 was chosen, Paul said that they were in good condition and were already ‘passed’ to be used on most of the national network, with passenger movements in Scotland, Yorkshire and Anglia, as well as empty stock movements across the East and West Coast Mainline.

The Swift Express Train can be coupled together with other Class 321s to make a consist of 4, 8, or 12.

It is possible for a 3 car train, but this would involve a lot of work to take out mechanical equipment out from underneath one of the inner two coaches.

More units will be made available in Q4 in 2021 after they come off lease with Greater Anglia, but this is dependent on when new trains enter service and Paul said that there’s a possibility that these may be ready for Christmas.

Since the Class 321 is electric only, Paul explained how the team are already looking into how they can make the train have a battery inside for ‘last mile’ journeys. This would be used for powering the train from the mainline to the depot, rather than powering the train for its full journey.

However, until this is developed, the 321 can be shunted into the depot using a Class 08 or Class 37 with a tightlock adapter.

We asked Paul where the trains would be unloaded, would they be at specific depots, or could we see the trains arriving into a station, such as London Kings Cross, and unloading there. Answering this, Paul said that this was completely down to the operator and customers as to where they’d like to unload and drop off.

Our final question for Paul was could this be used on other trains, for example when Class 319s are withdrawn or what about the already withdrawn Class 91 + Mark 4 sets from LNER. To this, Paul said that there was already “some interest” in Mark 4 sets and that the Class 321s are just the start and the same could be done to Mark 4 sets, or similar multiple units if the demand was there.

We were then taken on a tour of the Class 321 to see the work whiich had been completed on the train.

Nick Swift introduced us into the Class 321, and explained what work had taken place. This included all (except  4) seats taken out, a steel flooring put in, along with a modular clamp system and bar securing system.

Nick explained that these trains will be DOO (Driver Only Operated) with a corridor in the driving cars to allow the driver to access the interior if need be.

Currently, 29 Class 321s have been scrapped, 6 have returned to Eversholt, and 4 have been penciled in for conversion.

Nick explained that there 17 potential Class 321s up for conversion, meaning the fleet could soon be 20 strong.

Talking about the battery mode, Nick explained that 3 suppliers are currently interested in working on this part of the project, which, Nick says, will be being developed next year.

Finishing up in this section of the train, Nick explained that 4 seats were retained inside of the train (2 first-class seats, 2 standard class seats). Nick said that this, along with the toilet that has also been retained, is because that some interested customers may want to have staff on board to complete most of the sorting of the parcels whilst on their journey (almost like bringing the TPO back from the past).

Moving on down the train, we met with Sam Gilbert, who reiterated that the project has been ongoing since 2019, but the modification work started in 2021.

Sam explained that the fleet of Class 321s, including 321344 shown on our press trip, are “classic” 321s, which arent PRM compliant and weren’t part of the Renatus project which saw some Class 321s refurbished.

321344 is due on lease with a new customer, which remained unnamed, but said it was a large parcel distributor in the UK.

Sam also said that on average we could see up to 650 trolleys onboard a 12 car service, with each coach rated at up to 9.5 tonnes (laden).

Paul Sutherland, Client Services Director at Eversholt Rail said: “We are proud to see the first Swift Express Freight train completed and ready for service. Collaborating with both Ricardo and Wabtec on this project has delivered a train that will demonstrate the potential for a cost-effective, low carbon solution to meet the growing demand for home delivery of parcels around the UK and contribute towards the 2050 net-zero emissions targets. We look forward to seeing the Swift Express Freight train running in service later this summer.”

Jonathan Brown, Technical & Innovation Engagement Lead (Rail), Ricardo said: “It’s been immensely enjoyable to be part of the Swift Express Freight team with Eversholt Rail and Wabtec. The project required significant collaboration between all stakeholders in order to successfully deliver a viable, low-carbon solution within the timescale. I can’t wait to see the vehicle in service and making a positive impact on sustainable logistics.”

Andy Derbyshire, Group Managing Director, Wabtec UK said: “It is great to see the recent efforts of our collaboration with Eversholt Rail and Ricardo come to fruition. Our team in Doncaster has done a superb job delivering this important milestone project and we look forward to seeing the train produce genuine carbon and cost reductions.”

What do you think of the Class 321 freight trains? Let us know in the comments below.

Rail Support Services has told RailAdvent that they have assisted in transporting a damaged Merseyrail Class 507 train...