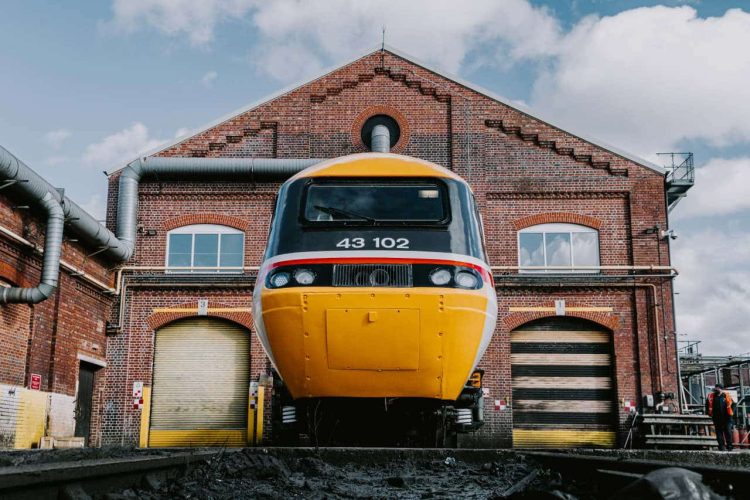 East Midlands Railway, alongside Porterbrook, have today unveiled HST Powercar No. 43302 into Intercity Swallow livery and has reinstated its original number, 43102.

The 43s will be retired by East Midlands Railway after 39 years of service in May 2021, making way for newer trains to operate services.

43102 is a famous power car, having broken the Intercity World Speed Record in November 1987 when it ran at 148.5mph between Northallerton and York.

43102 was renumbered 43302 by its previous operator, London North Eastern Railway, but has today regained its original number and livery that it carried when it broke the world record.

When the Powecar is retired in May, it will be donated by owners Porterbrook to the National Railway Museum in York, and will join 43002 ‘Sir Kenneth Grange’, which has been preserved in York after being withdrawn from service with Great Western Railway.

Neil Bamford, Fleet Director for EMR said: “The team at our Neville Hill depot in Leeds have been working hard behind the scenes to strip unit 43302 of its current livery, repaint it in its legacy colours and reinstate its original number in homage to the ‘end of the HST’ era.”

4% reduction in East Midlands Railway services from next week

“What an incredible way to pay tribute to the HSTs and the magnificent efforts from all our staff, who have operated and maintained the fleet over the years.

“I personally remember as a 19-year-old, way back in 1980, going on HST commissioning runs from Derby to Darlington, putting the trains through their paces and doing various tests before they entered into service, such happy memories.

“This is a fitting way to recognise the end for this iconic machine; a massive slice of railway heritage and history.”

Neil Foster, Fleet Services Director for Porterbrook said: “EMR and Porterbrook have worked closely together for many years to collaboratively manage the iconic HST fleet, these trains are much loved by the millions of passengers they have carried over the decades.

“Today’s event was a great way to mark the role played by HSTs in transforming the Midland Main Line into one of Britain’s premier rail routes. With their reputation for comfort and speed these icons of British engineering re-invigorated rail travel between Yorkshire, the East Midlands and London.

“Celebrity power-car 43102 will proudly display its original livery whilst it continues to serve EMR passengers, before undertaking its next journey to a new home at the National Railway Museum to be reunited with Sir Kenneth Grange.”

What do you think of the livery? Let us know in the comments below!

Greater Anglia is continuing its programme of new trains with the first one this year on the Southend...