Part of an £80m scheme to protect the railway 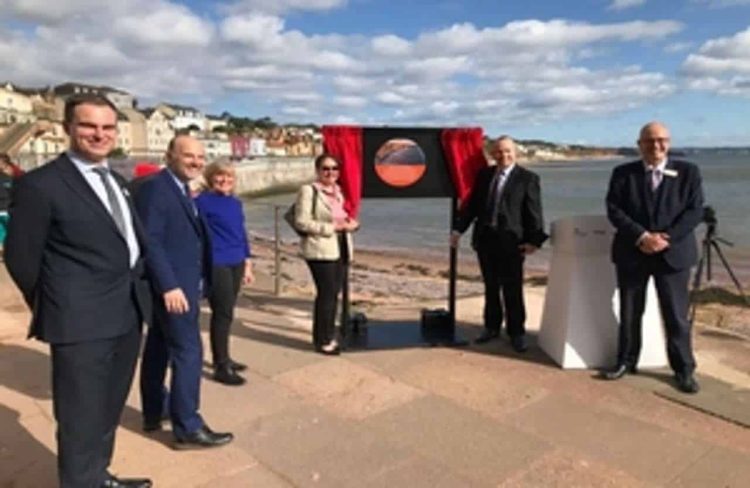 The work will protect the railway from rising sea levels and extreme weather. The line connects Devon and Cornwall and has previously been closed due to storm damage.

The first phase is part of an £80m project to protect the railway; the new sea wall is 2.5m higher than the old one. A new curved top to the wall helps deflect the waves back to sea rather than covering the railway line.

The official opening included a tour on the new 360m promenade. Work on the next phase between Coastguards and Colonnade breakwaters is 415m long and received planning approval from Teignbridge District Council in August.

Mike Gallop, Network Rail Western route director, said: “It has been a pleasure to welcome the Rail Minister to Dawlish to officially open the new sea wall and show him the result of all the hard work that has been carried out over the last year.

“Work on the finishing touches is progressing really well and we have been delighted that the new wall has received lots of positive feedback from the local community and is already better protecting the railway. We hope that the new wall proves a real asset to the town for generations to come.

“We are now looking forward to starting the next section of the project, continuing to provide this much-needed resilience for the railway line in the south west. We expect to start work later this year.”

Rail Minister Chris Heaton-Harris MP said: “Our investment in this new sea wall will provide a resilient railway for generations to come, delivering for the thousands of passengers that rely upon this vital link every day, and the residents whose homes and businesses must be protected.

“This rigorous set of defences forms part of our ambitious plans to deliver reliable, punctual journeys across Devon and Cornwall, improving connections between communities to help the South West build back better, boosting the local economy and tourism.”

Councillor Andrea Davis, chair of the Peninsula Rail Task Force, said: “We are all committed to a more resilient rail link into the South West and the new sea wall at Dawlish is key element of that. It is essential for all businesses and communities in our region that we don’t have a repeat of the line being severed as it was in 2014.

“Network Rail has worked tirelessly on these new defences and I’m sure everyone is pleased the Minister had a chance to see for himself what has been achieved in Dawlish. It was also a good opportunity to continue to discuss with the Minister the further support we need from Government to improve the region’s rail links.”

Anne Marie Morris, Member of Parliament for Newton Abbot, said: “It’s great to be able to welcome the Rail Minister to Dawlish to see the new sea wall and to also be able to discuss the next stages of the rail resilience project including the next phase between Coastguards and the colonnade and also the much needed access improvements at Dawlish station.”

Matthew Golton, interim managing director for GWR, said: “Collaboration between national government, local government, business and all parts of the rail industry is evident in every single piece of this sea wall and I am proud of the part GWR has played.

“It is a first stage, but it is a brilliant first stage. It says that the Dawlish railway line is here to stay and it says that Devon and Cornwall will remain connected so that businesses can thrive and the people of the UK can keep enjoying the glorious sea views as they start and finish their holidays.”

Tom Joyner, managing director for CrossCountry Trains, said: “We know how much this region values its CrossCountry train services, so today’s ceremony is great news and shows the industry’s commitment to maintaining the South West’s transport links to the rest of Great Britain.

“In these difficult times it’s good to see work continuing to build a resilient railway at Dawlish that business and leisure passengers can rely on, which will be so important to supporting the region’s recovery.”