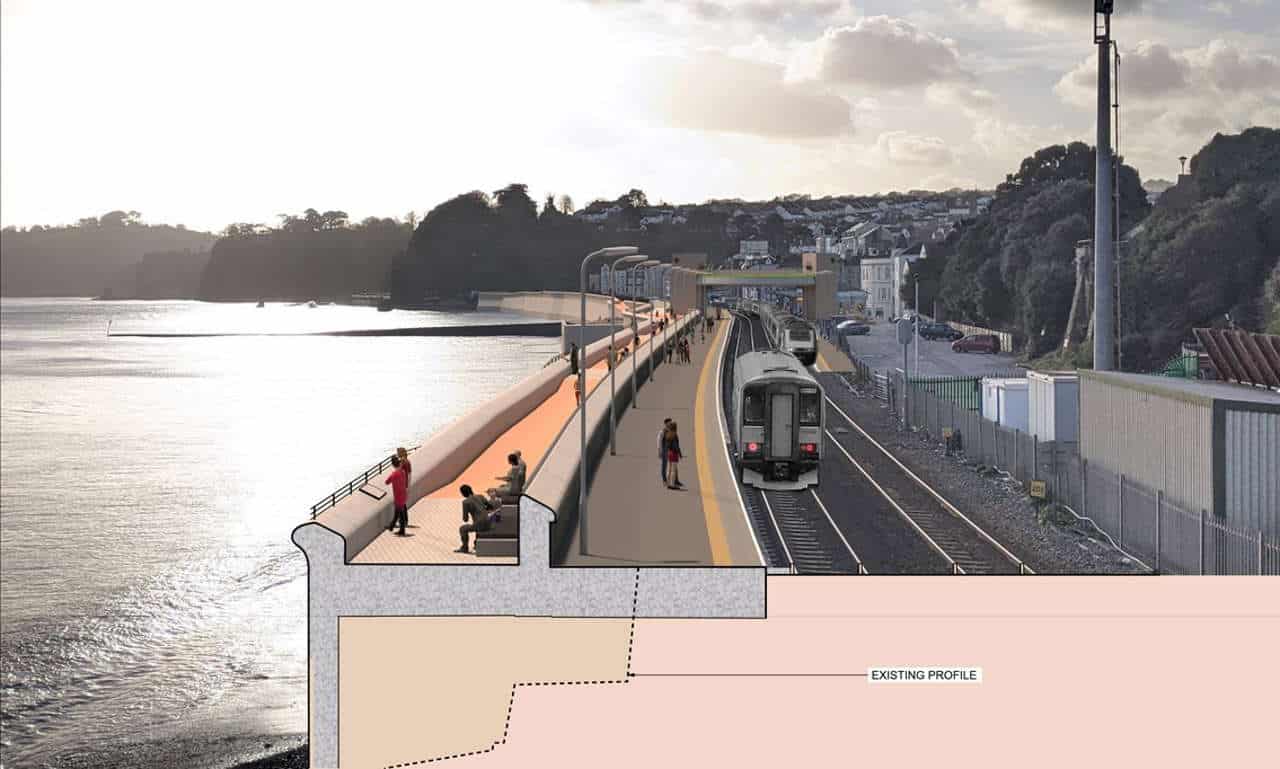 This week, Teignbridge District Council approved Network Rail’s plans for the remaining section of the new Dawlish sea wall, which will provide more protection for the railway against extreme weather.

Network Rail hopes to begin construction on the second section later in 2020, which follows the opening of the first section of wall in July.

The work will see a high-level wider public promenade incorporated into a new sea wall, ramped pedestrian access to the beach, a footbridge to link the two parts of the sea wall and an accessible footbridge with lifts for Dawlish station.

The reconstruction of the timber platform will also improve accessibility, making it easier for passengers to get on and off trains at the Grade II listed station.

Construction is expected to take around two years and deliver a £10m boost to the local economy.

Network Rail’s director for the Western Route Mike Gallop said: “We know the local community in Dawlish feels strongly about the future of the sea wall and the resilience of the railway and we have listened to their views while developing our plans to protect the railway and the town from extreme weather.

“We are pleased that Teignbridge District Council has approved the remaining section of the new sea wall and thank members for their thorough reviews of our plans throughout the process to date.

“We are delighted with the positive feedback we’ve received from residents about Marine Parade and we know many are looking forward to the improved accessibility the work from Coastguards to Colonnade will bring.

“The new sea wall will protect this vital rail artery to the south west for the next 100 years. World leading engineers have designed these plans, having considered hundreds of other options, and it will ensure the railway line is more resilient for generations to come.”

Chair of the Peninsula Rail Task Force, Cllr Andrea Davis said: “We are pleased that Network Rail’s plans for the second phase of the seawall project has been approved. This is great news for our residents and businesses across the peninsula and visitors to the region. Establishing a resilient main line is a vital aspect of the PRTF’s work and the Dawlish sea wall has always been a priority since the storm damage in 2014.

“This project will deliver greater resilience to the remaining sections of sea wall, ensuring that our network can withstand the weather and that people can travel across the peninsula reliably. We have already seen the benefits from the first phase of works, with a £5m uplift to our local economy, and the next phase of works will build upon the benefits released so far.”