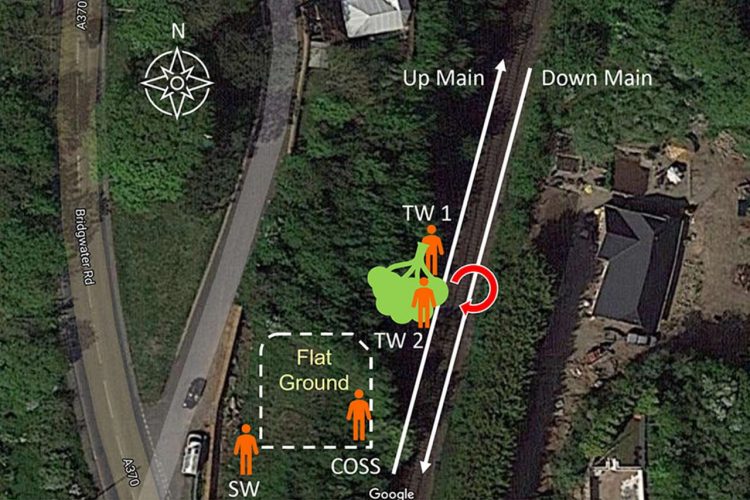 The Rail Accident Investigation Branch (RAIB) has issued its report into an incident in which a passenger train narrowly missed two track workers and struck a tree near Weston-super-Mare.

At around 13:10 on Friday, 14th January 2022, the 09:25 CrossCountry service from Penzance to Newcastle was travelling at 95 mph when it narrowly missed two track workers and struck a tree which was foul of the line.

The incident occurred at Uphill Junction, approximately 2 miles southeast of Weston-super-Mare, between Highbridge & Burnham and Worle.

Once they reached the cess, they were close to the adjacent open line, but without any protection from moving trains in place. While attempting to position the tree to allow for easier removal, they entered the space between the rails and pulled the tree across the open line.

The track workers became aware of the presence of the train after warnings were shouted by the Controller of Site Safety (COSS), who stated that he had been attempting to call the signaller when the train approached. The track workers moved to the cess and clear of the line approximately 2 seconds before the arrival of the train, which then struck the tree. Although the track workers were close to the tree at the time of collision, nobody was injured.

After the train came to a stop, the driver contacted the signaller to report the incident. The driver then examined his train and discovered that it had sustained minor damage but was able to continue to the next planned stopping point, Bristol Temple Meads.

QTS Group were operating as Network Rail’s principal contractor for a package of vegetation removal works in the Uphill Junction area. The track workers involved were undertaking de-vegetation work as part of this package.

The vegetation clearance required the team to work within the railway boundary adjacent to a line which was open. The area within 3 metres of the nearest running rail is classed as being ‘on or near the line’ by railway rules.

Under the planned safe system of work, staff were required to have a site warden in position when on or near the line to ensure they did not leave their site of work and get closer than 2 metres to the open line (the designated position of safety for lines on which trains can approach at 100 mph (160 km/h) or over).

The tree which was struck by the train was an ash between 3 and 4 metres tall, and was growing 3.2 metres away from the adjacent line. As such it was located within its own length from the nearest running rail and was defined as a ‘red’ category tree by the QTS ‘red, amber, green’ decision-making tool. This required the track workers to be directly supervised by a QTS supervisor when felling the tree.

A second entrance has been opened at Hackney Central station to ease congestion, and provide better access to...