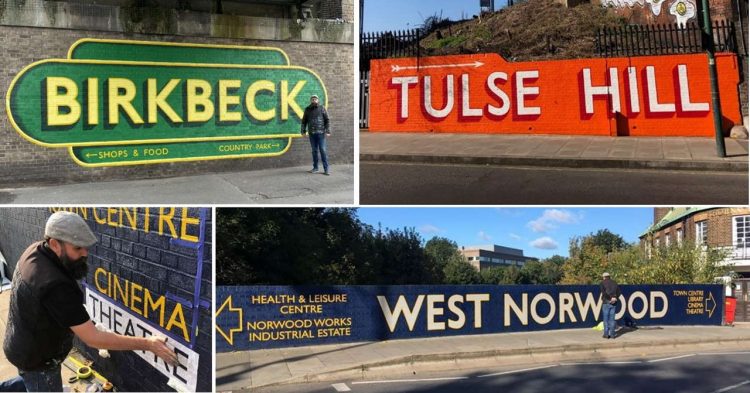 Train operator Southern have welcomed three remarkable murals for its London metro rail route which have been designed and painted by local scenic artist Lionel Stanhope.

The three stations have their own local identity and are iconic across South London. Each of the murals has seen local community and rail industry partnerships work together in order to complement the areas served by the stations.

“It is a pleasure to paint my signs in these local communities; they are always received well and chatting to locals as I’m painting is always a positive experience. These signs can only be made possible by thorough organising on the part of a motivated group or individuals. It shows what can be achieved with driven local projects.”

Steve Fleming who is Southern’s Station Manager has played a central part in drawing together the parties needed to make the murals happen.

“Many thanks to everyone who’s helped make these fantastic murals happen, and especially the local communities for their valuable input, from expression of interest, to funding, and even polling to decide what colours they should be!

“I’m really happy to have helped bring these projects to fruition, as they enhance the urban realm, brighten our passengers’ journeys and remind people of the railway being a part of the local area.”

Network Rail provided permission for all of the murals as they are the owners of the walls on which they are painted and also provided funding for the Birkbeck project.

“Murals are a great way for the railway to bring positivity and a brighter face to the communities we serve. We own bridges and other structures across the south and not only do these murals make them much nicer to look at, but they also encourage people to respect and look after them. We’re always open to creative ways to make our railway look better and more welcoming for the neighbourhood.”

The murals at Tulse Hill and West Norwood were commissioned via the ‘Station-to-Station’ Business Improvement District (BID) which covers both areas served by the station. The Tulse Hill mural saw the BID funded by the Borough of Lambeth.

Originally, the West Norwood mural had been organised before the pandemic and was delayed as the pavement which runs alongside the bridge is too narrow to offer social distancing.

“As a business improvement district we have now worked with Lionel on four occasions – the station name signs on the two bridges plus another couple of murals on our industrial estate, Norwood Works.

“At Tulse Hill, Lionel matched the colours to the art installation already underneath the bridge, and it looks very cheerful, even matching the graffiti eggs above. Thanks to Steve and Lionel who helped us get to the right person at Network Rail to get the permission to use the wall.”

The Birkbeck mural saw Lionel commissioned by Birkbeck Community Initiative which is a local environment-focused group. Station manager Steve Fleming had introduced himself to the group using their Facebook page and the group then asked him how they might go about getting a mural for their area. Following Steve’s involvement with the Gipsy Hill station mural which was painted by Lionel some years previous, he was able to get the group directly in touch with the artist, and the right people at Network Rail.

“We are massively proud of our mural here at Birkbeck and immensely grateful for the goodwill and generosity extended to our community by everyone involved in the project: Steve Fleming and his colleague Rob Whitehead at Southern, Jonathan Nesbitt at Network Rail, and of course, Lionel.

“We started the consultation about the mural colour scheme and design details over the festive period and ran three polls through the community group Facebook page over Christmas & New Year to finalise the colours and design. The project brought our community together – discussing and deciding the details created a sense of ownership – and the mural reinforces our community’s identity.

“We had to meet a time constraint on completion of the project to qualify for funding from Network Rail, and Lionel prioritised our mural to ensure it was delivered on time. We’re looking at having t-shirts printed with the design, which will be sold locally to support further community projects.”