Watch: Railway bridges being driven through the streets of Leamington Spa 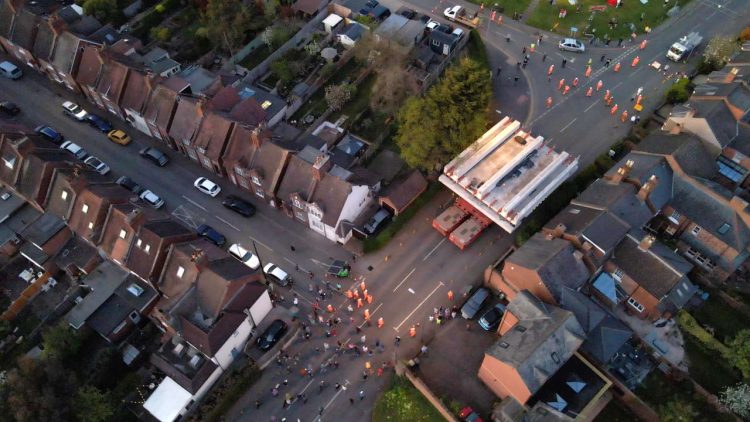 The impressive multi-angle drone and time-lapse footage shows the project right through to rail services going back to normal following the four days of line closure.

The former Milverton station bridge is shown being removed on the video before being driven down the A445 ahead of its 60-tonne replacement being steadily moved into position on the back of a massive vehicle called a Self-Propelled Modular Transporter (SPMT).

The work got underway straight after the last train passed on Thursday the 14th of April with a mass of engineers working right around the clock to extract the railway lines, remove the old bridge, drive the new bridge into position before reinstating new tracks, all in time for trains returning back to normal service on Tuesday the 19th of April.

Now that the new bridge is in place, trains can travel at full speed across it, unlike the previous 118-year-old structure, which due to its condition, could only see trains running over it at 20mph. The new bridge will bring improvements to journeys between Nuneaton and Leamington Spa by providing faster and more reliable travel for passengers and just in time for the Commonwealth Games this summer.

The engineering spectacle drew hundreds of onlookers to see the incredible sight of both bridges being driven through the streets.

“I’m hugely proud of the team who gave up their Easter bank holiday to carry out this major work to improve railway journeys through Leamington Spa.

“Driving bridges down residential streets is no mean feat and our meticulous planning over many months meant that everything went well in time for trains to run again this morning. I’d like to thank local people for their patience and understanding while we worked day and night to replace Rugby Road railway bridge and for the work, we’ve still got to do to finish the job.”

With the hardest part of the project now complete, engineers will continue to complete work through the coming weeks, including the building up of the walls by the side of the new bridge on the railway embankment. This work will mean some single lane closures for the A445.

Overnight work will also be carried out to the railway foundation stones and can only be completed whilst trains are not running.

The old bridge will be taken to pieces at Potterton Sports Fields which is the site compound for the project ahead of being removed and the green space reinstated for locals.