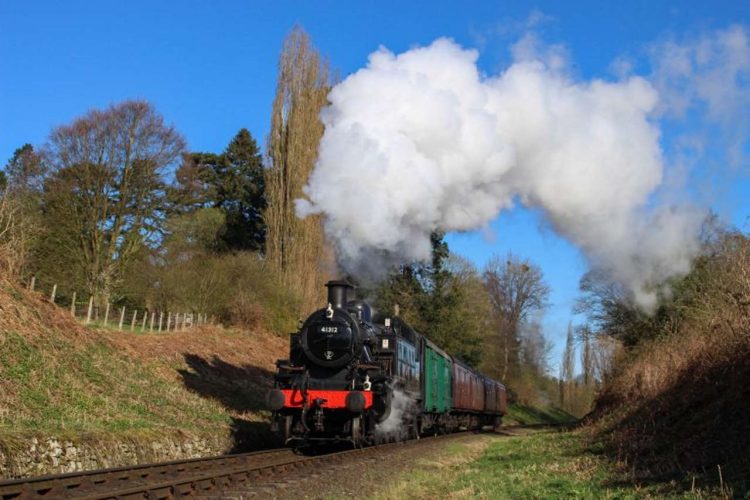 LMS Ivatt Tank 2-6-2T 41312 will be visiting the Somerset and Dorset Railway (S&DR) at Midsomer Norton for a short period in September.

The visit is to celebrate the 60th anniversary of the last running of the “Pines Express” from Manchester to Bournemouth over the Somerset and Dorset.

For the past year, the railway has been looking at opportunities to mark the event. Thanks to the generosity of the Mid-Hants Railway, 41312 is to visit the railway in September 2022 to celebrate the 60-year anniversary of “The Last Pines” and the revival of the Somerset and Dorset Joint Railway at Midsomer Norton.

41312 will be used for two special photo charters on 15th and 16th September and will be hauling passenger trains on the weekend of the 17th and 18th September.

The loco was built at Crewe locomotive works in May 1952, and spent its entire working career on the Southern region.

Whilst not strictly an S&D loco, members of its class were based for a period at Bath Green Park and 41312 itself was based at Bournemouth, at the southern end of the S&D, from May 1964 until April 1967. The Bath-based engines would have been used on Bath to Binegar and Templecombe to Evercreech Junction local passenger trains.

They were also often used as banking engines behind heavier trains over the steep gradients of the northern extension of the line towards Bath, and would have been seen passing through Midsomer Norton Station regularly in the 1950s.

Matt Cornborough, Chair of SDJR Co Ltd, said “We are very pleased to have secured the services of the Ivatt for this 60th anniversary celebration of the end of the Pines Express. Although only with us for a short period it will be a fantastic opportunity to re-visit the Pines on the only operational section of the original Somerset & Dorset. Come along and enjoy!”