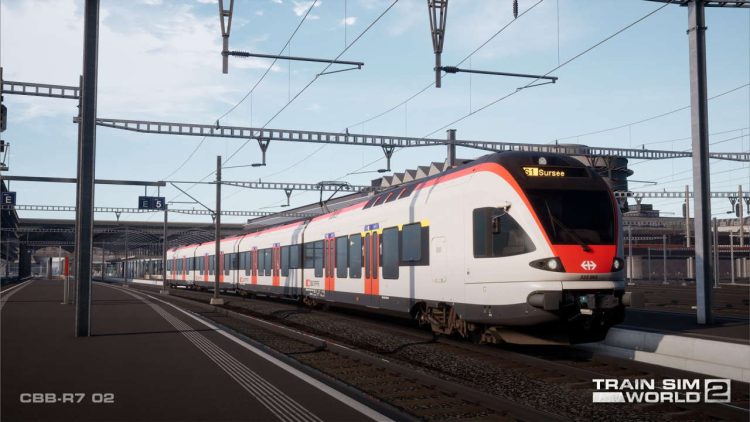 SBB’s RABe 523 EMU is an electric multiple unit that belongs to the FLIRT family of trains, which are equipped with low floor entrances and air suspension, and feature fast acceleration, high braking power, and low weight.

They are used for regional and local passenger services, and were originally developed for Swiss Federal Railways. Due to their success, many other operators around the World also ordered variants. The first FLIRT was delivered in 2004 for use on the Stadtbahn Zug in Zug, Switzerland, and is part of the S-Bahn Zentralschweiz.

Swiss FLIRTs usually consist of four cars per train, two driving cars and two middle cars, with 20 first-class seats and 161 second-class seats. Only the two bogies at both ends of each train are powered.

Train Sim World 2’s version of the SBB RABe 523 is also equipped with the European Train Control System (ETCS), which is the first time it has featured in a Train Sim World 2 release.

There are four levels of ETCS, but Rivet Games’ SBB RABe 523 is fitted with two: level 0 and level 1 Limited Supervision. When driving in level 0, ETCS only monitors the speed limit and enforces a speed reduction in the event of speeding, and will only monitor the speed when it exceeds 100kph.

Level 1 ETCS features “limited supervision” functionality, as used on the Luzern to Sursee route in real life. Level 1 Limited Supervision (L1LS) only provides supervision along the line when needed, meaning that players must keep their eyes on the track as new information can be given through the signals. However, although ETCS is not currently available in the cab, Rivet Games’ implementation of ETCS will allow a true-to-life experience on one of Switzerland’s busiest routes.

The S-Bahn Zentralschweiz: Luzern – Sursee for Train Sim World 2 will be available from Friday, 24th March for Xbox One, Xbox Series X|S, PlayStation 4, PlayStation 5, at Epic Games Store and Steam.