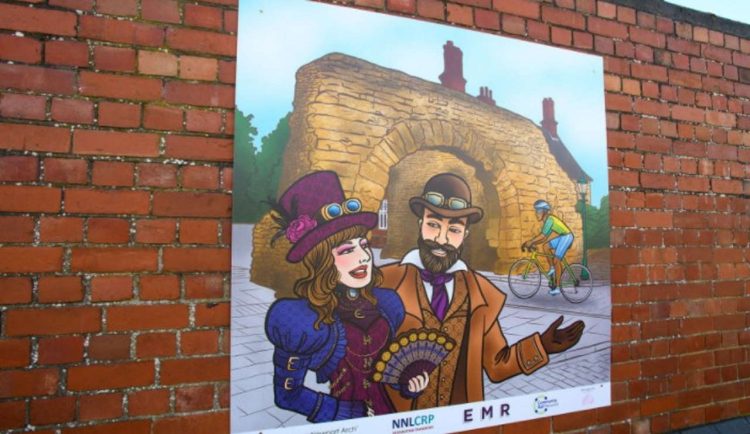 Lincoln’s history and heritage are reflected in six pieces of artwork on display next to platform five at the city’s railway station.

Local artist Mel Langton and pupils from Lincoln Christ Hospital School produced the artwork in collaboration with the National Citizen Service and Lincoln City Foundation. The designs were conceived over several months in a bid to brighten up a section of the station, and to give passengers an insight into the culture and history of Lincoln.

The artwork features Lincoln’s castle and cathedral, Newport Arch, and Lincoln City Football Club. One of the pieces depicts the railway network, and another depicts Lincoln as being the birthplace of the tank.

Tamsin, who is in year 11 at Lincoln Christ Hospital School, said: “Taking part in this community project was a wonderful experience, seeing it all come together was a dream.”

Her classmate, Caitlin, said: “I’ve enjoyed every moment of this amazing project. I am grateful that I was given the chance to work alongside a real artist, to create something that all of us, as a community, can enjoy for years to come.”

Elaine Porter, Art Teacher at the school, said: “Working with EMR and Mel has had a significant impact on the Year 11 Creative Arts Enrichment Group. It provided them with the opportunity to develop their skills in digital art, taking their artwork out of the classroom and into the community.”

Artist Mel Langton was delighted to have been chosen to create the artwork and work alongside the pupils and said: “It is great to be able to help bring some fun and colourful imagery to Lincoln Railway station.

“We wanted to produce some vibrant designs that would brighten the station and welcome visitors into Lincoln, whilst sharing a little of our county’s history and great places to visit.

“Along with designing my own pieces for the project, it was a pleasure working with the schools involved and the LCFC National Citizen Service to create the further three vibrant and diverse designs that are now on display.
“I really hope that the artwork will be enjoyed for many years to come.“

Donna Adams, Community Engagement Manager at East Midlands Railway, said: “Everyone involved in this project should feel very proud and we would like to thank all the volunteers for their help and time.

“The artwork is a lovely addition to the station, it not only brightens up the area, but also manages to highlight the rich history, heritage, and wonderful landmarks that the city has to offer.”

The Rotary Club of Lincoln Colonia adopted Lincoln station five years ago and has been busy transforming the disused platform, clearing weeds, and picking up litter.

Peter Harrold, from the Rotary Club of Lincoln Colonia, said: “We spoke with the station manager and formed an adoption group to see what could be done. The platform has been transformed and the artwork is the icing on the cake.

“Titled ‘Romans to Railways, the artworks feature Lincoln’s Roman and Industrial past, including references to the first tank which was built here in Lincoln and the importance of railways to the city. Lincoln’s famous football club, the Imps, is not forgotten either.”

Police warn drivers after misuse of level crossing in Berkshire

EMR are expecting extremely busy services between Nottingham and London over the weekend of the 28th and 29th...