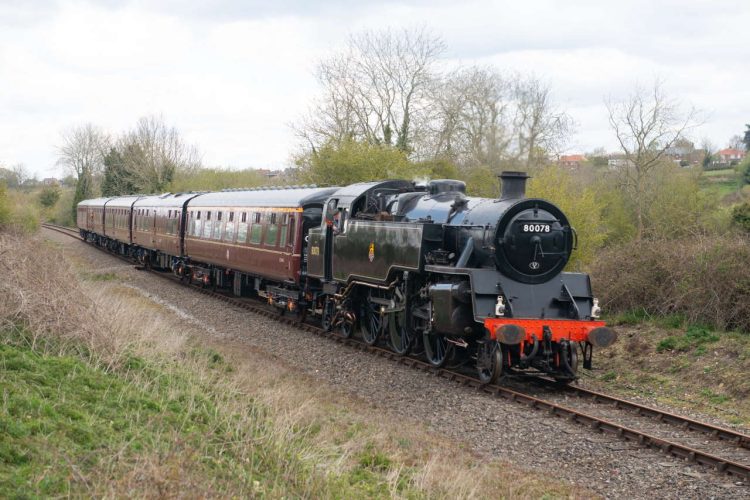 The Mid Norfolk Railway will be running a full programme of events this year, with one of the main events being a proposed Steam and Diesel Gala, as well as other special event weekends.

The railway will reopen on Sunday, 27th March, which is Mother’s Day. Trains on that day will feature the railway’s resident BR Standard class 4 MT steam locomotive 80078, hauling BR maroon-liveried vacuum-braked coaches. Tickets will be on sale via the railway’s website and on the day at both Dereham and Wymondham Abbey stations.

Last year’s popular ‘Kids go free’ group tickets will again be available. The day is intended to be a family day at the railway, where visitors can enjoy the sight and sound of a working steam locomotive.

Details of running days can be found on the railway’s website at https://www.midnorfolkrailway.co.uk.

During the winter, railway staff and volunteers carried out a number of engineering tasks and developments, but they have taken slightly longer to complete because of the ongoing impact of Covid restrictions. Work includes resignalling Dereham station and yard, which will bring back operational semaphore signals to the station for the first time since 1969. The resignalling is especially important as it increases the capacity of the station, and is an important precursor to the eventual reopening of the line north to a full passenger service.

Other work has included work on the weigh beam at Crownthorpe Bridge, lineside flailing, renewing sleepers, and installing new timbers and point motors at Dereham station, and maintenance of the platform at Wymondham Abbey station.

Charlie Robinson, the chairman of the Mid Norfolk Railway Preservation Trust, said: “Everyone associated with the railway is looking forward to welcoming back our passengers, and Mothers Day is an ideal family time to mark the reopening. We are sure our passengers will see the difference that the long winter closure has allowed us to make to the railway for the better”.

George Saville the General Manager of the Mid Norfolk Railway said: “This time of the year, when the railway is closed to public running, is so important as it means the railway gets the essential maintenance and development work that keeps us going done but also hopefully makes the railway better each year.

He added: “It is hard work and I would like to thank all of our Staff and Volunteers for their efforts and to issue a general invitation to come and join the team. There are many roles not all directly railway-related that need doing and we always need more people to help run the Mid Norfolk Railway”.

Check Before Travelling: Tyne and Wear Metro closed in Newcastle this week