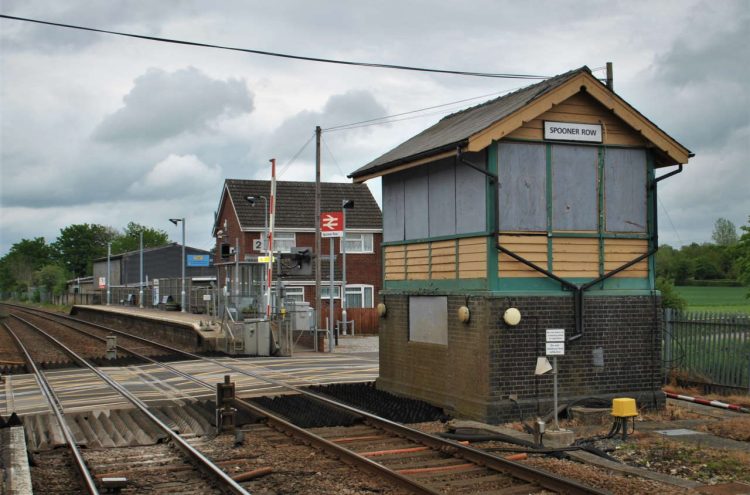 The Mid Norfolk Railway wants to raise funding to restore and equip the former Network Rail Spooner Row Signal Box for use at Wymondham Abbey.

The heritage railway was given the signal box by Network Rail nine years ago as it was no longer in use and has taken until now for it to become released. The appeal aims to raise the £12,000 it will take to transport, refurbish and equip the box so that signalling can be re-introduced at the Wymondham Abbey end of the line.

Charlie Robinson, the Chairman of The Mid-Norfolk Railway, said:

“The arrival and then commissioning of the Signal Box at Wymondham, will mark the first stage in a long held aspiration of the railway to create a new station for the railway at Wymondham. This new Appeal is designed to raise the funds to begin turning that aspiration into a reality and I encourage all who support our efforts to donate as much or as little as they can, every pound will help.”

At the moment, the signal box is stored at Spooner Row, following the lifting of the wooden half of the box and demolition and site for the locking room during 2021.

As well as donations, sponsorship is also an option for those who may like to be even more generous. A £200 sponsorship opportunity is available for a signal lever and will see a plaque recording the sponsor’s name, mounted on the Signal Box wall. The sponsor will also be given two tickets for a standard operating day of their choosing and will be invited to visit the box once commissioned to operate the signal lever they have sponsored.

Donations of £100 will also be recorded with a name plaque on the Signal Box wall and will see the donor given a pair of tickets for a standard operating day on the Mid Norfolk railway during the 2022 season which can be redeemed by on a day of their choosing.

For larger donations a sponsorship packaging is available, to find out more about this please get in touch with MNR’s Press Officer and Project Manager of the refurbishment of the Signal Box by email: [email protected]

All donors will be eligible to get an electronic project progress update via email.

Donations can also be made online directly by bank transfer or by cheque, visit the Mid Norfolk Railway Signal Box appeal page above for details.