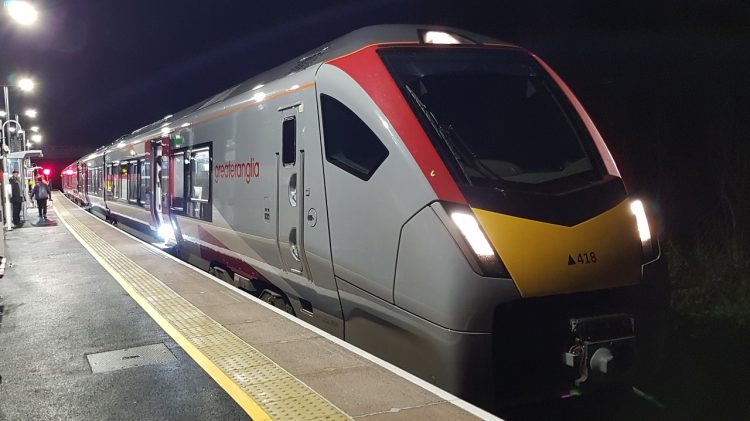 The new railway station at Soham has been officially opened this week by Cambridgeshire & Peterborough Mayor Dr Nik Johnson, five months ahead of the original schedule to help deliver benefits to the local community sooner.

Trains stopped at the station for the first time in 56 years since the last passenger trained stopped at Soham.

A long campaign has been held to bring the railway service back to Soham, to aid local investment and offer more sustainable transport options to regional and national destinations.

Many rail enthusiasts called at the station to see the first of the Greater Anglia’s Ipswich to Peterborough service Monday morning.

Passengers can travel directly to Bury St Edmunds, Ely, Ipswich and Peterborough and easy connections to Cambridge, Norwich, London, the Midlands, the North and Scotland on the new state-of-the-art trains.

Ellie Burrows, Jamie Burles and Network Rail Chairman Sir Peter Hendy on behalf of the railway community unveiled a second plaque in memory of four railway workers who were part of the Soham Rail disaster on 2 June 1944. The unveiling was witnessed by relatives of the four railway men.

Children from three local schools took part in a poster competition, the winner was announced at the event. The mayor presented the winner and runners up with a framed copy of their poster along with a book token. J Murphy and Sons Ltd are running a collection of activities with local schoolchildren, which include designing and building a building block bridge along with the poster competition. The bridge activity helps raise awareness of technical subjects and encourages young designers and engineers of the future who may very well become involved with future railway projects.

The new Soham £18.6 million station has been funded by the Cambridgeshire & Peterborough Combined Authority, including £1million in Local Growth Deal support. Network Rail and its contractor, J Murphy and Sons Ltd constructed the new station close to the site of the old station that closed in 1965.

Take a look at the amazing 12 month time-lapse film of the station being constructed:

Mayor Dr Nik Johnson, who unveiled a plaque to mark the opening of the station, said: “Congratulations to everyone involved in this great enterprise. Cooperation and partnership have created a benefit of lasting value for this community and its future generations, opening a door into opportunity. We need more green, clean public transport for the public good – and this new station is proof that, together, we can make it happen.”

Network Rail’s route director for Anglia, Ellie Burrows said: “It’s taken years of hard work and dedication by colleagues across the rail industry and a range of local partners to reconnect Soham with the railway. The entire community has been so supportive throughout the development of this project and I to want to express our gratitude to everyone who has worked so collaboratively with us to make to make this project a reality.”

Greater Anglia managing director Jamie Burles said: “We’re proud to be the train operator serving Soham with our high quality new bi-mode trains and to be the operator responsible for managing the new station. It’s not often that new stations are opened and even rarer that they are then immediately served by new state-of-the-art trains. We know the opening of the station has been much anticipated and we’re committed to continuing to offer an excellent service on this line and across our network.”

Chief Executive Officer of J Murphy and Sons Ltd John Murphy said: “I’m very proud that Murphy delivered this station earlier than originally planned for the people of Soham. I’m also pleased to have seen the connections we have made in the community during the construction. Our project team have hosted school visits, organised charity fundraisers, spoken with care home residents and delivered school assemblies! I’m sure the people of Soham are going to enjoy using their new station.”

Lucy Frazer MP said: “I am delighted Soham Station has reopened. This project is a fantastic example of the quick delivery of public transport infrastructure that will benefit this local community. I believe it can act as a springboard for enhancing rail services in our area by helping us make the case for reinstating the loop near Newmarket which could provide a direct rail service between Ely, Soham, Newmarket and Cambridge. I have campaigned for this station since before I was elected and am delighted that it has now come to fruition. I want to thank all those involved in delivering the project at pace, including the Combined Authority, Network Rail and J Murphy and Sons Ltd, as well as the former Mayor, James Palmer, who played an integral role in driving this project forward.”

PAW-SOME! SWR relents so George the dog can return to Horsley station