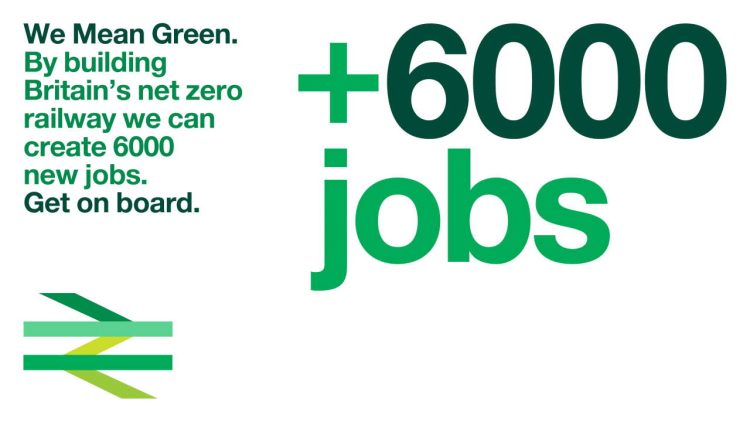 New research has revealed that the building of a net-zero railway could bring 6,000 green jobs with employment potential between 2024 and 2050.

The Rail Delivery Group says that not only could a net-zero railway provide decades of green jobs but could also see economic benefits as much as £4.4 billion whilst supporting the growing hydrogen and battery industries.

The study has also assessed the employment and financial benefits which could be made by electrifying the remaining parts of the network and has also reviewed the benefits of building hydrogen, battery and electric trains that would be required where electrification isn’t possible.

The rail network is the single biggest user of electricity in the country and moving into the future will need large supplies of renewable power along with both hydrogen and battery storage. If the government were to commit funding for the decarbonisation of the rail network it would push forward investment, building more jobs in existing renewables such as wind and solar farms.

Currently, the government focus for Britain is to have 5GW of low-carbon hydrogen production capacity for 2030. With hydrogen trains needing between 2-5GWh of power, it could mean that rail could take the part of an ‘anchor tenant’, which would provide the growing hydrogen industry the ability to ramp-up and possibly become an exporter of British expertise.

A clear and foreseeable demand for new energy storage solutions would also lead to development within the industry, especially for the automotive manufacturing hub in the Midlands. The building of infrastructure and investment into technology would also work towards the government’s levelling up agenda with the potential for up to 6,000 jobs, with 90% of those positions based outside of London and the South East and with at least half of the positions being high-skilled and would create £2.2bn in economic benefits.

The assembly of the electric, battery and hydrogen-powered vehicles at current assembly plants such as Newton Aycliffe (North East), Goole (Yorkshire and the Humber), Derby (East Midlands) and Newport (Wales) will create thousands of jobs.

Case studies were carried out, an example is that of Hannah Wiles who is 28, and a graduate in Mechanical Engineering from Loughborough University.  Currently, she is a Project Engineer in the Asset Protection team for Porterbrook, who are the Derby-based rolling stock company that is working on the HydroFLEX train. Part of Hannah’s role is overseeing component and materials recovery from trains once they have come to the end of their working life.

Hannah said: “I’m working on an exciting project to upcycle one of our existing trains to run on hydrogen so we can showcase how this green fuel can be used to power passenger trains. I’m very proud that my work on HydroFLEX will support making trains even more environmentally friendly and I’m really keen to see the railway adopt further green technologies that have been developed successfully in other sectors.”

Andy Bagnall, Director General at the Rail Delivery Group, said: “Trains are already one of the greenest forms of transport and this report shows the considerable benefits of government working with rail companies to go even further by making all trains net zero to run.

“Building Britain’s cleaner and greener railway is a once-in-a-generation opportunity not only to help protect the environment but also to create high skill, well-paid jobs across the country both in rail and in the green industries of the future such as hydrogen and battery power. Investing in decarbonising the railway really is a win-win.”

Malcolm Brown, CEO Angel Trains and Chair of the cross-industry Sustainable Rail Executive, said: “Climate change is one of the most pressing issues of our time and the rail industry has a clear and ambitious vision to decarbonise the network. Now is the time to be bold and invest in a decarbonised railway as the backbone of a green and thriving economy.”

The study has been commissioned by the Rail Delivery Group and was carried out by economists Oxera, jobs and skills experts at National Skills Academy for Rail and rolling stock consultants Ipex.