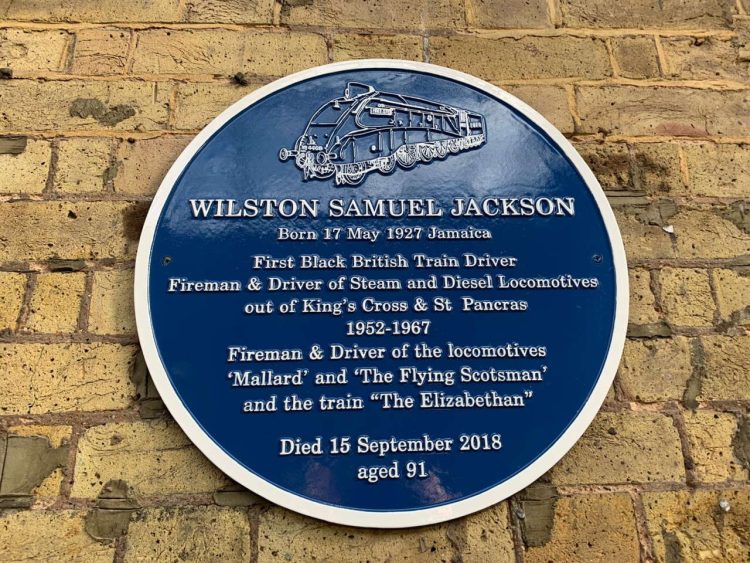 The plaque honours Wilston’s outstanding contribution to the rail industry and aims to encourage more people from Black, Asian and minority ethnic backgrounds to consider a career on the railway. The ceremony was attended by Wilston’s family, Network Rail chief executive Andrew Haines, and ASLEF General Secretary Mick Whelan.

Wilston, known as Bill to his friends and family, was born in the Jamaican parish of Portland on 17 May 1927. He moved from Jamaica to London in 1952 and joined the railway as a cleaner, learning how to look after steam engines by keeping their pipes clean and free from soot, and keeping them running by tending their fires.

Wilston worked his way up to be a ‘passed cleaner’, a fireman in all but name, and would work long shifts, shovelling 10 to 12 tonnes of coal a day in hot and filthy conditions. After finishing his shifts, he would return home to study for his locomotive driver exams

He passed his locomotive driver exams and in 1962 became Britain’s first black train driver. He was not the first black man or woman to aspire to be a train driver, but racism was rife at the time, and there were many accounts of applications and promotions being blocked because of an individual’s skin colour or background.

On Wilston’s first day as a driver, some of his white colleagues were furious at the news of his promotion from fireman to driver, and agreed to forbid any white man to work under him. When the allotted fireman told Wilston he would not work for him, his line manager intervened and told the fireman to go home as he no longer had a job. Faced with the sack, the fireman changed his mind and asked if he could stay, to which Wilston replied: “I don’t have a problem with you, it is you who has a problem with me. If you do your job well, we’ll get along fine.”

Wilston had a long and successful career on the railway. He also provided tuition to others, including his own brother, to help them pass their driving exams. In 1964, he broke both legs when his train crashed into the back of a stationary goods train near Finsbury Park after a signalman mistakenly gave a green light. Wilston shouted to his fireman to ‘jump’, saving him, but there was not enough time for Wilston to escape and he had to be cut out of the wreckage. After a long recovery, he returned to the railway in 1966 and went on to drive famous locomotives and trains such as “The Flying Scotsman” and “The Elizabethan”.

He later emigrated with his family to Zambia, where he taught the locals how to drive trains.

During Black History Month, the rail industry is continuing efforts to boost diversity. According to ASLEF, the train driver’s union, just 10% of train drivers in England, Scotland and Wales are from Black, Asian and ethnic minority backgrounds. At Network Rail, the infrastructure manager which employs signallers, operatives and engineers among others, employees from those backgrounds currently make up 9.38% of the overall workforce, up from 8.8% the previous year. Having been unveiled during Black History Month, it is hoped that the plaque commemorating Wilston’s career will encourage more people from Black, Asian and minority ethnic backgrounds to follow in his footsteps and consider joining the railway.

Polly Jackson, Wilston’s youngest daughter, said “My father dedicated much of his life to the railway. He was never late or missed a day, and he was so proud of his work, despite the many challenges he faced. Today was a fitting tribute to his life and career.”

Molly Jackson, Wilston’s eldest daughter, added “Today is a proud day for our family. It was fantastic to be at the unveiling event to see the industry he gave so much to, recognise his achievements and give a little something back to him.”

Andrew Haines, Network Rail chief executive, said: “I have been fascinated to learn about Wilston’s life and career. He was a real trailblazer for our industry and we owe him a huge debt of gratitude for his incredible service, made even more remarkable by the many obstacles he had to overcome.

“This plaque is a fitting tribute to his career, and I hope it helps to inspire the next generation of train drivers and railway workers from minority ethnic backgrounds, because despite some progress we know they remain under-represented in our industry.”

Mick Whelan, ASLEF General Secretary said: “We are incredibly proud to have had Wilston as one of our own, a dedicated driver with an illustrious and ground-breaking career. This blue plaque is fitting recognition of that.

“Nearly 60 years after Wilston earned his key, just 10% of train drivers in England, Scotland and Wales come from an ethnic minority. ASLEF continues to campaign for change across the sector and for a driving grade that represents 21st century Britain.”