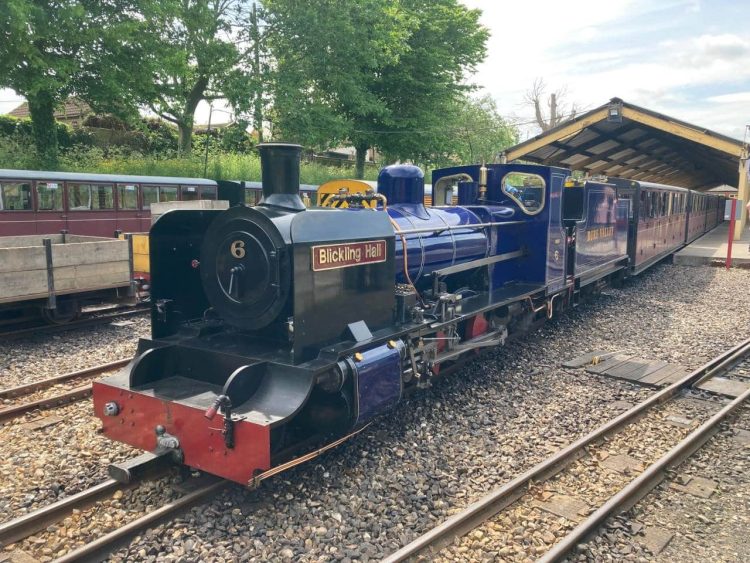 The Bure Valley Railway, which runs from Wroxham to Aylsham in Norfolk, has completed the UK’s most extensive trial of bio-coal in heritage steam locomotives.

The trials took place on Friday 11th June and Monday 14th June in cooperation with the Advanced Steam Traction Trust and the Heritage Railway Association.

Departing Wroxham at 10:15 on Friday 11th June, the locomotive burnt the standard Welsh coal from Ffos-y-Fran as a base comparator.

The second round trip used Homefire Ecoal50, departing at 14:00. On Monday, Briteflame and Homefire Ovals were used by locomotive crews to fire the locomotives.

Lots of measures were taken to complete a fair test, including weighing the coal, the amount of water consumption, what ash was left in the ashpan, and computers were connected to the locomotive to test vacuum, exhaust performance and speed.

Homefire Ecoal50 has been said to be the nearest at ‘recreating’ the unique experience visitors like when visiting a steam railway.

The results of the tests are:

Homefire Ecoal50 is made up of 50% biomass, most notably crushed olive husks, which comes from the process of making olive oil.

Andrew Barnes, Managing Director of the Bure Valley Railway explained careful measurements were taken during the experiment: “Fuel in the tender was weighed, the amount of water consumption and ash left in the ash pan and smoke box were also measured. Tranducers were rigged to a computer in the lead carriage to measure smoke box vacuum, exhaust performance, and speed.”

“All three fuels functioned well but Homefire Ecoal50, made up of 50% biomass, notably crushed olive husks which would otherwise end up in landfill with the associated risks of methane, and 50% traditional solid fuel fines, was an unqualified success giving the same performance as our usual Welsh coal whilst emitting up to 40% lower emissions.”

John Hind, Chair ASTT said:  “We are not only looking at performance here but how the bio-fuel burns and what will be acceptable to passengers?  Homefire Ecoal50 is the nearest to recreating that unique ambience visitors expect recreating the smell of heritage steam.”

HRA’s CEO Steve Oates attended the event. He said: “It’s excellent to see one of our member railways taking the lead. The timing couldn’t have been better. As carbon came under the spotlight at the G7 summit, a UK steam railway has been testing an alternative to fossil fuel. Although heritage steam only produces 0.023% of total UK carbon emissions we continue to be very focussed on finding ways to reduce this further.”

Andrew Barnes, MD of Bure Valley Railway added: “The trials have been a positive step forward for the future of Heritage Steam and suggest that, certainly for 15-inch gauge lines, we now have 2 viable alternatives to coal. More trials will of course be needed under controlled conditions for larger narrow-gauge and standard gauge steam.

“We are all in this together and we want to find a solution that will work for the lines that use a couple of thousand tonnes of coal through to the operations like Bure Valley using around 100 tonnes a year.”

Commenting on their involvement with the trials, Julian Martin, Sales Director at CPL Industries said: “We are delighted to be involved in the project with the HRA, Bure and ASTT and are pleased with the results. CPL industries is keen to play its part in supporting the heritage industry in its journey to transition to renewable biofuels. Homefire Ecoal50 is a second generation biofuel and we are working towards manufacturing a 100% renewable smokeless fuel made from unwanted biomass materials, which could be tailored to meet the unique requirements of different types of steam engines.

CPL industries currently imports 200 thousand tonnes of coal a year for use by our industrial, domestic and heritage customers and we feel uniquely placed to play a key role in helping our customers move towards a low carbon and renewable future.”

The trials were also attended by a representative of Network Rail.  The HRA is committed to supporting further testing of bio-fuels and working with member railways, Network Rail, the National Railway Museum (part of the Science Museum Group), ASTT and bio- fuel producers to find an industry wide solution that will eventually lead to a carbon free future.