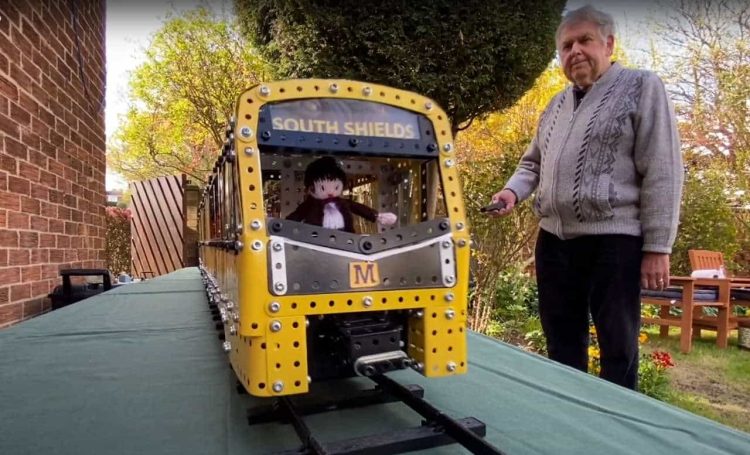 A 2.5-metre replica of the new trains to be introduced on the Tyne & Wear Metro has been created by a model maker from Whickham in Gateshead.

The model has its own track and can be controlled remotely, The interior of the train has seats and handrails fitted. You can see more in the video below.

John contacted Nexus who put him in contact with train manufacturer Stadler who provided some dimensions to help with the project.

This isn’t the first Metro model John gas made, he has previously made models of the current Metro Fleet.

He hopes to get the model on display at Locomotion is Shildon and also at the Beamish open-air museum. The 42 new trains being manufactured by Swiss train manufacturer Stadler are expected to enter service in 2023

If you are interested in Meccano, then you can find out more about the North Eastern Meccano Society on its website.

John, who is Chairman of the North Eastern Meccano Society, said: “Meccano is a real labour love for me, so I was more than happy to take on the challenge of recreating the new Metro train.

“I’ve been in love with Meccano since the age of five. It’s a fantastic thing for all ages and generations to be creative with. It’s a great British icon.

“I wrote to Nexus to ask about putting this together and they then put me in contact with Stadler, the train builders, who sent me some dimensions. I was also able to get a good guide of what I needed to do from the various artists images of what the new Metros are going to look like.

“It took me three months to build it. I’m really pleased with the outcome. I’ve made Meccano models of the current Metro trains before, so this was the next step and it was an exciting project, given we’re all really looking forward to seeing the actual new Metro carriages next year.

“The aim is to get the model on show for a few days at Beamish open air museum and at the Locomotion railway museum at Shildon once lockdown measures allow.”

John added: “Making model railways is a big part of what I like to do as part of my hobby. I’ve had a Meccano set since the age of five and it just went from there.

“The great thing about Meccano is that it’s recyclable. You can build a model but you don’t then have to throw it away, you can take it to bits and make something else. I’ve built up a vast collection of Meccano parts over the years and in 1996 I got involved with the North Eastern Meccano Society. Before lockdown we would go all over showcasing our models and people love them, whether they’re young or old.”

“John’s done an absolutely brilliant job in creating a model of the new train using Meccano. He’s been a friend of Metro for many years and has wowed visitors with his model making at previous depot open days that we held in 2010 and in 2005.

“It’s great to see the finished piece and it’s really educational for young people, who may be looking at careers in engineering.

“It certainly whets the appetite for the actual new Metro trains which aren’t too far away now, with manufacturing commencing in a few months’ time.”

Andreas Discher, project manager for Stadler, added: ‘The new fleet of trains that we are delivering for the Tyne and Wear Metro will be safe, reliable and built for passenger comfort. It’s great to see so much interest being generated by local people for these trains, with Mr Herdman’s expert model demonstrating the level of enthusiasm for them.’ Northumbria Police and Nexus who own and operate Tyne and Wear Metro have issued joint statements following a...