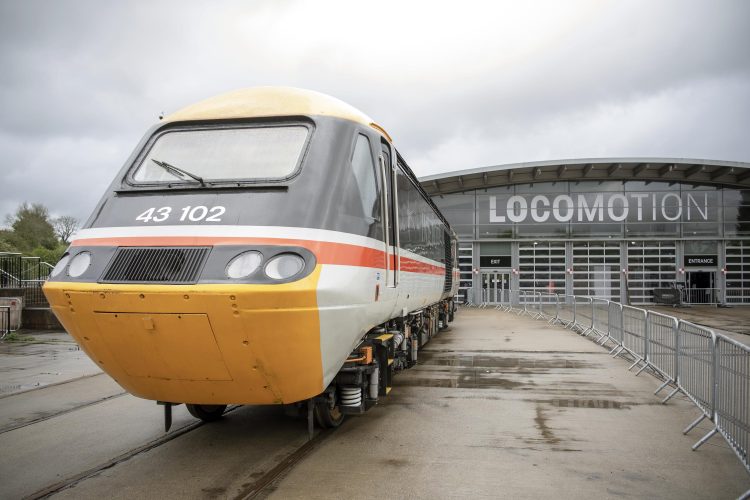 Porterbrook has announced that they have donated HST Powercar No. 43102 to the National Railway Museum.

After being withdrawn from service by East Midlands Railway earlier this month, the new home for the locomotive will be at Locomotion in Shildon.

Porterbrook says that the donation builds on its ‘gold’ partnership with the NRM, which will see both the NRM and Porterbrook focus on ‘inspiring the next generation of young engineers’.

Mary Grant, Chief Executive Officer of Porterbrook, said: “Whilst we are firmly focused on investing in the future of Britain’s railway, our partnership with the National Railway Museum shows that we also celebrate its successful past. As long-term asset owners with a fleet of 4,000 rail vehicles we are pleased to support the NRM as it explores how the railway contribute to our national life.

“Our wider collaboration with the National Railway Museum will include joint work on inspiring the next generation of young engineers as well as highlighting how the railway can sustainably contribute to delivering Net Zero.”

Judith McNicol, Director of The National Railway Museum, said: “The National Railway Museum is proud to have a strong and established relationship with Porterbrook, who have previously joined forces with us on projects such as Future Engineers, Rail Fest and the overhaul of Flying Scotsman. Porterbrook continue to work with us to engage our visitors, and in particular young people.”

“Our combined passion and resources ensure that we offer positive STEM experiences to bridge the skills gap with as many young people as possible. In the next phase of our relationship, we look forward to working with Porterbrook as a Gold level partner and continued collaboration to support the future of the UK rail industry.”

Both the National Railway Museum and Locomotion reopened to visitors on the 19th May 2021, and 43102 joins a collection of diesel vehicles at Locomotion, alongside Prototype HST 41001 and Deltic Prototype DP1.

Buses to replace trains on the Cotswolds Line

Off The Rails – Episode 1: Nathaniel Parker, Life of a Railway Photographer