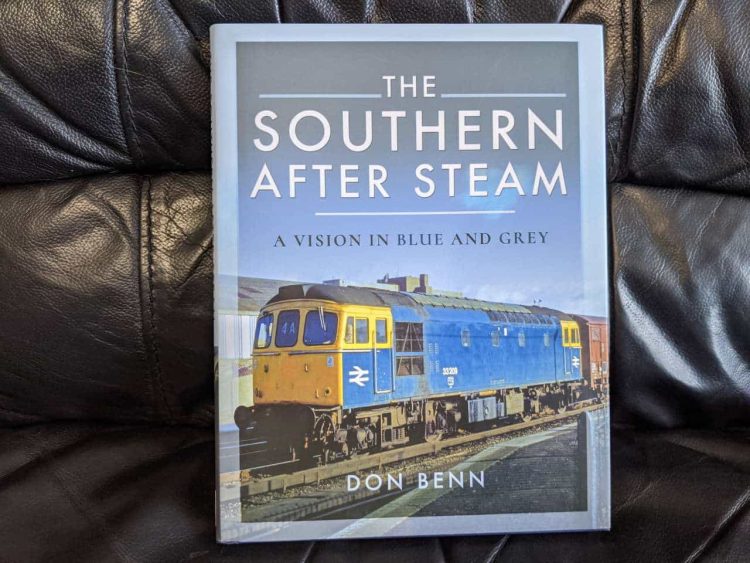 Published by Pen and Sword, and written by Don Benn, The Southern After Steam is a must for any diesel fan… here is our review.

When steam on the Southern network finished in 1967, author Don Benn went to work on recording what the railways looked like. Black and white photos feature but these turned to colour from 1972.

A huge collection of photos feature along with a lot of information is crammed into its fairly small size.

Measuring in at 34cm by 20cm, this book is rather lightweight and a handy size for picking up at any time of the day and having a flick through, it is split up into different chapters, but we found it easy enough to open on any page and look at the variety of photos.

The book is split up into 9 different chapters.

A detailed chapter with a lot of photos, all of which are high quality and crisp.

Examples of trains featuring in this chapter include 4 SUBs Class 405 at various points, including Clapham Junction, London Waterloo and Wimbledon.

This chapter also features the CEPs, a popular range of Electric Multiple Units, with a number of photographs featuring here.

Here the author looks at a number of trains such as the 4 BIGs, 4 CIGs and 4 VEPs at key locations such as Redhill and Chartham.

A fairly short chapter covering the Bournemouth trains, including Class 73s and Class 33 locomotives on TC sets of carriages.

A section covering the famous Isle of Wight trains, which were operated at the time by Class 486s and Class 485s.

The past chapters have featured multiple units with electric power, but this section delves into the photographs of diesel-powered trains with a number being from Hastings Diesels.

Moving onto Loco Hauled trains, this chapter features Class 33s, Class 47s and Class 50s in a wide variety of liveries as well as the lesser-known Class 71s.

Here the book looks at departmental stock, such as stores and De-Icing trains that were used from withdrawn EMUs.

A short chapter that sees what the railways were like when the snow fell as well as the temperatures, and how the railways continued to operate.

What you will find, due to the time period that author Don Benn photographed the trains in, there are a rather large amount of Multiple Unit photos, and not many are of locomotives.

Having said that, books that feature multiple units of bygone eras are few and far between, so this is a nice change from the norm, and we learnt a lot from it.

I am a big fan of the multiple tables towards the end of each chapter, it is a great way of finding out more about the trains’ speed and how long it took to travel between two places.

With the format of the book, I found myself being invited into each photograph to find out more and explore the local area.

On some of the chapters, it is nice to learn about some of the other types of units. Whilst not all are photographed, it enhances the book experience and I still find this section a nice addition to the chapter, which includes 4 CORs, 2 BILs and the Brighton Belle units.

The size of the book makes it easy to carry around, take it on the train to work, take it on holiday, or just sitting in your front room. This is in addition to the large photos and concise information makes it great for impulse reading.

If I was being really picky, it potentially would have been nice to see some comparison shots (if available) to compare what the scene is like now, or what, if any, trains made it into preservation.

This book is a must for any Southern fan, and is a great addition if you are interested in the history of the railways.

We would like to thank Pen & Sword for providing us with a copy of the book for review.

This book is a must for any Southern fan, and is a great addition if you are interested in the history of the railways.

Steam has finally arrived for Train Sim World 2, with Dovetail Games bringing an engaging route to the...

Steam locomotive 61306 Mayflower to pass through Brentford this Tuesday