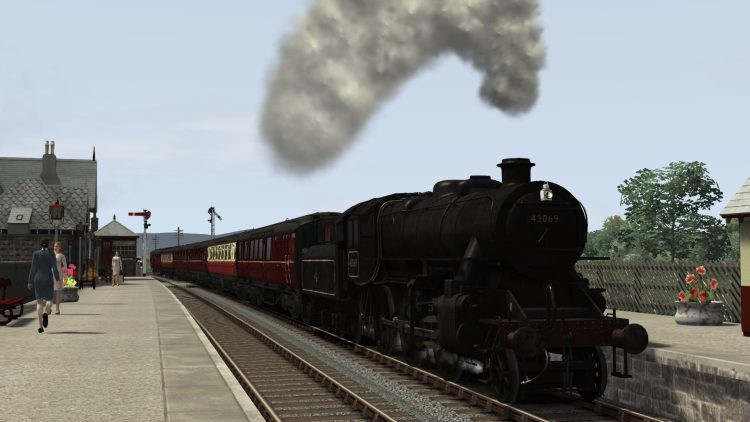 Firstly, what do you get for your £29.50? Well, as already mentioned this route features more than 100 miles of track. It includes The Stainmore line, which runs from Barnard Castle to Tebay, the Furness Line, from Kents Bank to Arnside, the Hincaster Branch, from Arnside to Hincaster Junction.

Also included is the West Coast Main Line from Burton Holme to Penrith and the Eden Valley Line from Eden Valley Junction to Kirkby Stephen East.

This map, courtesy of Steam Sounds Supreme, shows the sheer scale of this impressive route.

The first great point of this new route from Steam Sounds Supreme is that it only requires the European Asset Pack (bundled with Train Sim in previous versions), the TS Academy (again should be part of the game by default), the RSDL Foliage Pack (bundled with TS by default), AP stations (available as part of the Woodhead route add-on), and obviously a working copy of Train Simulator.

As part of the route, you also get some brand new locomotives to drive, these are the Ivatt 4MT and the Holden E4. Also bundled in the route are the BR Standard 4, Fowler 4F and Stanier Black 5.

The Ivatt 4MT and Holden E4 are both brand new locomotives to Train Simulator, and both are classed as ‘Advanced’ locomotives, so be prepared to sit down and learn how to drive these locomotives.

One thing that is great to see is a dedicated tutorial on how to drive the Ivatt 4MT. I found this very detailed indeed and was a great help in learning not only the locomotive and how to drive it but also a good section of the route.

The tutorial was very detailed and took you through exactly what to do to get the best out of the locomotive, down to when to put coal on the fire, how much regulator and also the simple things like how to turn on the lamps.

I would definitely recommend playing this tutorial before heading into the deep end, it was a big help to learn what to do. Sadly, we didn’t see a tutorial for the Holden E4, it would have been nice to see one featured, but having played the Ivatt 4MT tutorial, the E4 is a doddle to drive, and many of the skills learnt from the 4MT transfer over to the E4.

The tutorial can be replayed as many times as you like, which userful as you can revisit them to top up your skills in the future. The tutorial is saveable, meaning you can either spend 30-40 minutes learning how to drive, or just sit down for 10 minutes to learn a little bit.

In total, you get 15 scenarios with this route, with 11 scenarios for the Ivatt 4MT (inclusive of the tutorial scenario), 2 scenarios feature for the Holden E4, and 2 featured for the BR Standard 4.

Each scenario is engaging and enjoyable to play, with plenty of AI traffic to keep you entertained – not that you will get bored with the steep inclines. You best keep an eye on your boiler pressure as it will easily catch you out!

Every scenario is detailed, and there is definitely a scenario for everyone, whether you want freight or a local stopping service. I have enjoyed driving the Holden E4, with its short trains and local stopper services, it allows you to keep alert, whereas some scenarios involve less stopping and more fast runs.

The Stainmore, Shap & Eden Valley Route is also quick drive compatible, allowing you to drive your favourite train on the route. The Quick Drive is also very detailed, with alot of traffic around (and the option to be just the player train, if you want to alone).

As this new route from Steam Sounds Supreme runs on Train Simulator 2020, expert steam drivers will feel at home with the controls, with only the standard keyboard shortcuts used to fire and drive the locomotives. The tutorial is great for this as it does explain which keyboard buttons to press (an example being open the dampers by pressing M, close them with Shift + M).

Overall, I am really impressed with this route by the attention to detail shown by Steam Sounds Supreme and Ben Yates. This route is engaging and challenging, and one that you need to watch (you cant just set your HST to notch 7 and race towards Edinburgh here). The route runs really well, I didn’t encounter any stuttering or frame drops (even with an average spec PC).

Each of the locomotives are high quality, with most of the controls clickable. I have enjoyed the challenge of learning a new locomotive, especially with their own individual sounds and quirks.

I would definitely recommend picking up a copy of this impressive route from Steam Sounds Supreme. At more than 100 miles in length, the level of detail AND 3 locomotives, £29.50 is an absolute steal.

I am really looking forward to seeing future routes and addons from Steam Sounds Supreme.

We are hoping to stream this on our Twitch channel in the next week or so. If you haven’t already go to https://www.twitch.tv/railadvent and hit the follow button to know when we are next live.

We would like to thank Steam Sounds Supreme for supplying us with a copy of this route for review.

Whether your a steam fan, or are just looking for a new route addon, this route from Steam Sounds Supreme is a must buy. The views, sounds and detail are just stunning.

Steam locomotive 7822 Foxcote Manor to return to the Llangollen Railway This book from publishers Pen & Sword provides a detailed history of Clayton Type 1s as part of...