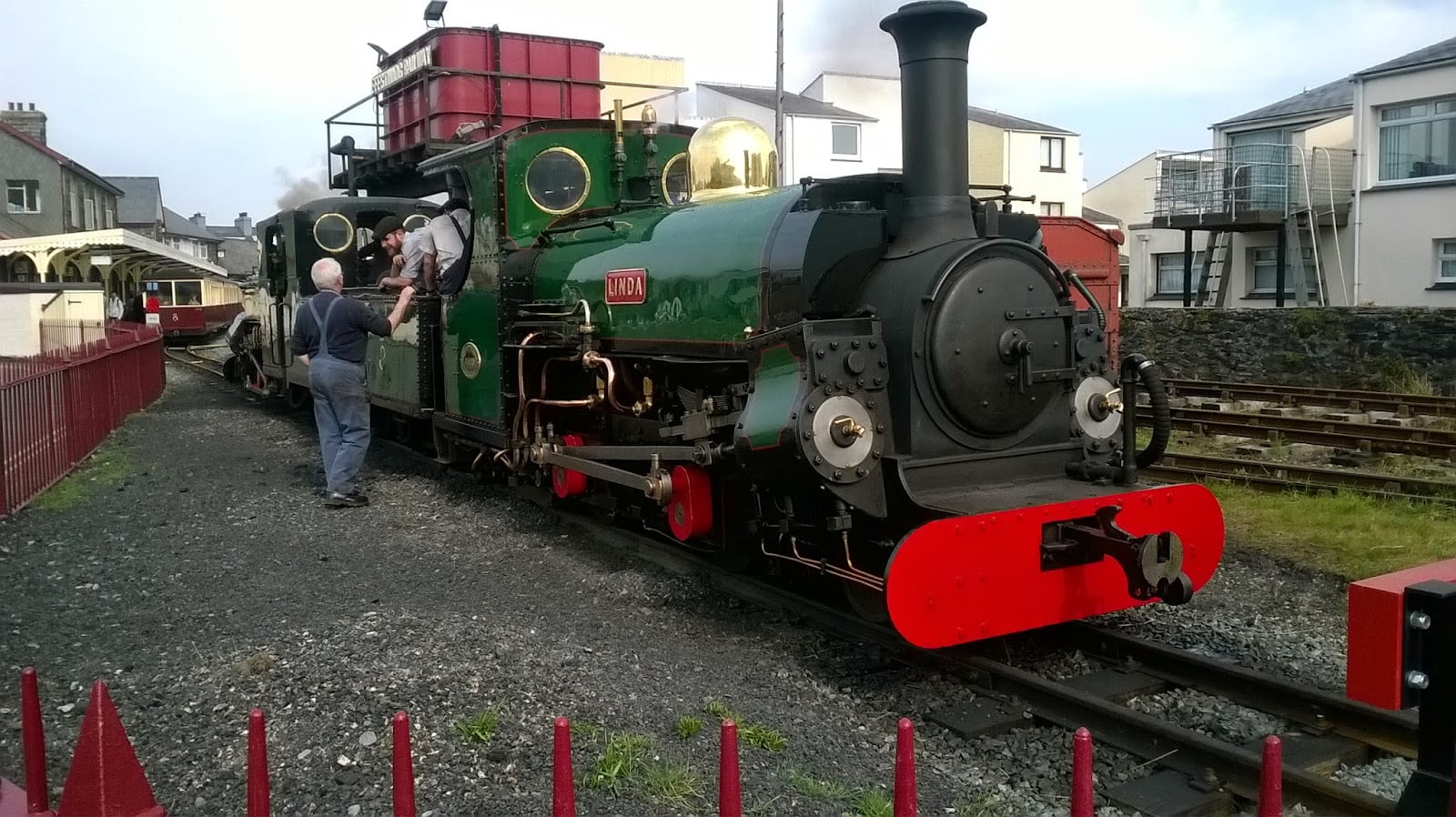 Blanche and Linda at Porthmadog

Over the Easter Bank Holiday, the Ffestiniog & Welsh Highland Railways were holding a lot of events for Easter, these included Easter Egg Hunts, and Footplate rides. I first visited Beddgelert for a ride on big diesel “Caernarfon Castle/Castell Caernarfon“. I even got chance to drive the diesel, very good fun!

The next Footplate Ride took place at Porthmadog Harbour Station, where Blanche and Hugh Napier were the engines. Obviously I didn’t drive, but it looked very complicated. This footplate ride was busier than the one in Beddgelert,  but I soon got a ride.

Visit to the Fairbourne Railway

The footplate ride was free but were taking Donations at both Porthmadog and Beddgelert, these donations were going towards the restoration of “Welsh Pony“, an England Locomotive built for the Ffestiniog, sister Locos include Prince, Princess and Palmerston.

After the Footplate ride, some very mysterious weather had come in, it was very foggy but only where the sea water was, leaving The Cob, and of Harbour Station surrounded in fog, it also created some good pictures.

The first trip of Easter on the Ffestiniog Railway was on Merddin Emrys, a “Double-Farlie”, it was to my surprise that I go in Carriage 12. This is a third class observation carriage that gives great views of the engine on the way to Blaenau Ffestiniog, and great views on the way back. We were the first train out of Porthmadog.

I also got to see Garrett 138 waiting to depart for Caernarfon. On the return journey we past Earl Of Merioneth at Tan-y-blwch, which was on its way up to Blaenau Ffestiniog.

Food on the Move

The next trip I made was the “Food On The Move” train. This train was Double Headed by “Linda” and sister loco “Blanche” with Linda facing in the opposite direction. This came as a surprise to me as the Loco Roster said for “Earl Of Merioneth”, but Blanche was earlier in the week converted back to coal firing, after being oil fired, so it was probably on a test run.

The “Food On The Move” is only ran on certain dates, so again please check your timetable before you travel, this train also requires advance booking. I really recommend ordering Steak Pie, very tasty! You travel up and then at Blaenau Ffestiniog, the stewards will serve your food at your table.

The journey started at Harbour Station, past Boston Lodge Works. We then past Merddin Emrys at Minffordd, stop here for Portmeirion, as we were the last train out of Harbour station, they wasn’t anymore trains to pass, so it was a smooth return journey, your food is served hot at your table.

We returned to Harbour Station with full stomachs and greeted with a nice sunset.

The final train journey I made was on the Welsh Highland Railway, we caught the 10:45 departure from Porthmadog Harbour Station, please check your timetable for train times. Our locomotive for today is Garrett 138.

The Welsh Highland Railway is a 40 mile round trip railway, running from Coast to Coast. On train food is provided, as well as a toilet.

This train provides magnificent views as it climbs through the Snowdonia National Park. The Train goes through the famous Aberglaslyn pass, with tunnels and rivers, great chance for a couple of photos. Just after the Aberglaslyn Pass, we arrived at Beddgelert, where we Passed Garrett 87, where the footplate rides took place,

After Beddgelert, we pass Meillionen campsite, so you could stay here if you like if you have a tent caravan or motorhome climbing further more.

Next we arrived at Rhyd Ddu, the highest point on this railway, look out for the summit sign just before the Rhyd Ddu station.

After Rhyd Ddu, the trains curves round the hill side, great opportunity for a photo of the engine. shortly after the downhill starts.

When you arrive at Dinas, look out for the tractor fill the loco up with coal, the train then runs down into the seaside town of Caernarfon, the train does wait here for about an hour, but please check your timetable.

We then make the return journey, arriving back at Harbour Station. A full return journey takes about 6 hours, so does take a full day, but it is a full day of enjoyment and great views.

With thanks to everyone at The Ffestiniog & Welsh Highland Railways

A previously unseen collection of the Lincolnshire Coast Light Railway photos has been published after more than 50...