Over 1,300 tickets were provided in the last year to the Rail to Refuge scheme 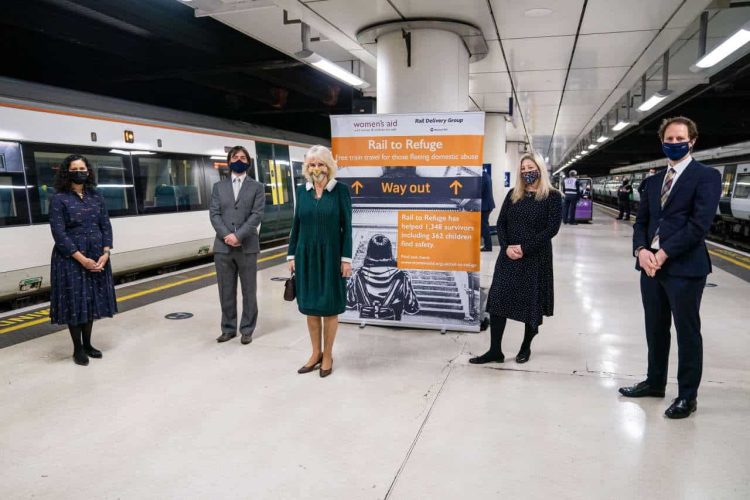 Yesterday (30th March 2020) Her Royal Highness The Duchess of Cornwall was at London Victoria railway station to meet some of the people involved with the ‘Rail to Refuge’ scheme.

The scheme enabled access to free train travel for those fleeing domestic abuse.

Last week, the Duchess of Cornwall said she was delighted to hear that the scheme had been extended.

Launched in April 2020, the scheme has seen four survivors a day using the scheme which is a joint initiative between rail companies and Women’s Aid.

In the last year, tickets have been provided for 1,348 people of which 362 were children. Over have of those who used the scheme said they would not have made the journey if it had not been paid for.

In conversation with Darren O’Brien, Her Royal Highness The Duchess of Cornwall commented: “This is a brilliant initiative. And you should feel very proud of yourself.

“It’s amazing during this lockdown how many wonderful ideas have been thought up… we need more Darrens!”

Darren O’Brien, station manager at Southeastern, said: “It was a real honour to meet with Her Royal Highness today, and to discuss the importance and significance of the Rail to Refuge scheme. When I first came up with the idea, I had no idea how many people it would support, but I was motivated by the possibility that it could be life changing, even if just to one person. I’m incredibly proud to have played a part, and hopeful that today’s activity will help to raise even more awareness of the scheme so that it continues to help others.”

Charlotte Kneer, CEO of Reigate and Banstead Women’s Aid, said: “We are so proud that the Dispatches documentary filmed in one of our refuges led station manager Darren O’Brien to suggest the idea to his employer Southeastern railway.  Women have told us how they have no money to pay for a train ticket because every aspect of their lives was controlled by the perpetrator. If they had not been able to get the rail fare, I dread to think what would have happened. This is a lifechanging scheme.”

Farah Nazeer, chief executive of Women’s Aid, said: “This vital scheme shows the importance of us coming together as a society to address domestic abuse, and what we can achieve collectively. Awareness was raised through Dispatches, which inspired Darren O’Brien, and his employer Southeastern listened and took action. We are so pleased to be able to continue this important scheme which means that survivors without access to money can reach refuge. We know that economic abuse is a significant barrier to being able to leave an abusive relationship. The wonderful news that all train companies are continuing Rail to Refuge will make a huge difference to hundreds of survivors across the country.”

Seb Gordon, Director of External Communications at the Rail Delivery Group, said: “Train companies are proud to have played a part helping so many survivors of domestic abuse, and to have gained the support of The Duchess of Cornwall for Rail to Refuge. Thanks to Darren’s idea and the support of all the train companies that ran with it, we’ve so far helped over 1,300 people take the train to safety.”