Duchess of Cornwall ‘delighted’ as Rail to Refuge Scheme extended 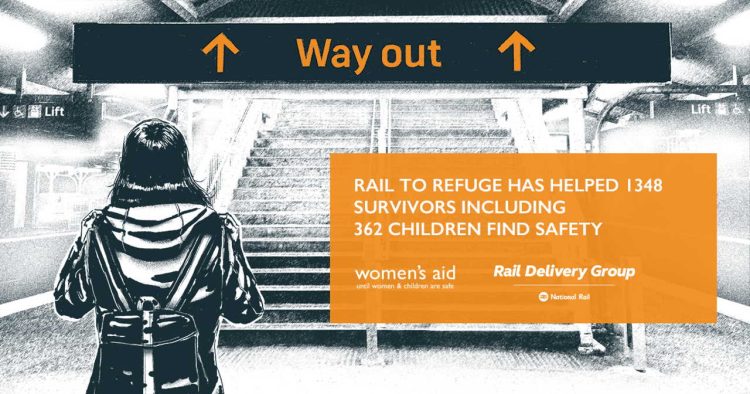 The Rail Delivery Group has announced that the Rail to Refuge Scheme, which was ending next week, is being extended by train companies to help more people to escape domestic abuse.

Figures have shown that four survivors every day have used the scheme to access free train travel.

Women’s Aid and rail companies joined together to create Rail to Refuge in which operators cover the cost of tickets for women, men and children travelling to refuge accommodation.

1,348 have been provided free tickets, including 362 children over a five.

62% of people using the scheme said that they would not have travelled if the journey had not been paid for.

Southeastern was the first operator to introduce Rail to Refuge in September, before GWR joined in March 2020 to mark International Women’s Day.

All operators joined the initiative on the 9th of April 2020 for the first lockdown, but this was extended until the end of March 2021.

However, companies have decided to continue Rail to Refuge as reports of abuse are worsening during current restrictions. 67% of survivors currently experiencing abuse say that their abuser is using lockdown restrictions as part of the abuse.

Women’s Aid has estimated that in 2019-20, refuge services in England supported 10,592 women and 12,710 children, however, the demand for these services is even higher.

Andy Bagnall, Director General of the Rail Delivery Group, said: “Train operators have provided lifesaving travel to four survivors every day through the Rail to Refuge scheme, and it’s right that we keep it going for those who sadly still need it. Rail staff are continuing to work hard helping survivors of domestic abuse with free train travel, while supporting all our passengers to feel safe on their journeys.”

Farah Nazeer, chief executive at Women’s Aid, said: “Women face many barriers when escaping an abuser. Leaving your home because you and your children are not safe is a massive undertaking. Additionally, leaving the abuser is a dangerous time with a huge rise in the likelihood of violence after separation, so it needs to be done as safely as possible, with support from expert refuge services.

“Many women and children have to travel long distances to escape their abuser. There remains a serious shortage of refuge spaces, so it is vital that women are not prevented access to safety in a refuge by the cost of travel. In addition, many survivors have experienced years of economic abuse and will not have access to a bank, credit card or even cash. Women tell us that they cannot afford to leave because the perpetrator has controlled their money and they have none of their own.

“We are delighted that train companies have worked with us to remove a significant barrier to people escaping abuse. The Rail to Refuge scheme will continue to be lifesaving for hundreds of women and children, and it is incredibly welcome news that it has been extended.”

In a specially recorded video message to celebrate the scheme Her Royal Highness The Duchess of Cornwall, a longtime advocate for victims of domestic abuse, said: “Lockdown has been hard for everyone, but for the survivors of domestic abuse, it has been life-threatening. I’m delighted to hear that Britain’s train companies are extending the Rail to Refuge scheme for longer to provide free travel to a safe refuge for those fleeing domestic abuse. If you need help, contact Women’s Aid for support and access to the Rail to Refuge scheme.”

Rebecca Hirst CEO of Pennine Domestic Abuse Partnership (PDAP) said: “Our client fled London with her four children to the safety and support of our refuge in Kirklees. She would not have been able to travel across the country to the safety of a refuge if it had not been for the Rail to Refuge scheme. She had been subject to physical, emotional, and economic abuse and had no access to money or her own bank account. Without the support of Rail to Refuge, she and her children would have found it incredibly difficult to travel to Kirklees and access safe accommodation. The scheme has made an extraordinary difference to survivors, and the flexible and timely support provided by train operators has been lifesaving.”

Transport Secretary Grant Shapps said: “I support every effort to counter the insidious and heinous crime of domestic abuse. Rail to Refuge has helped hundreds of survivors to reach safety by removing the financial barriers that prevent escape.

“Extending this vital support is truly lifesaving and I thank all those working so hard to help keep people safe on our railways.”