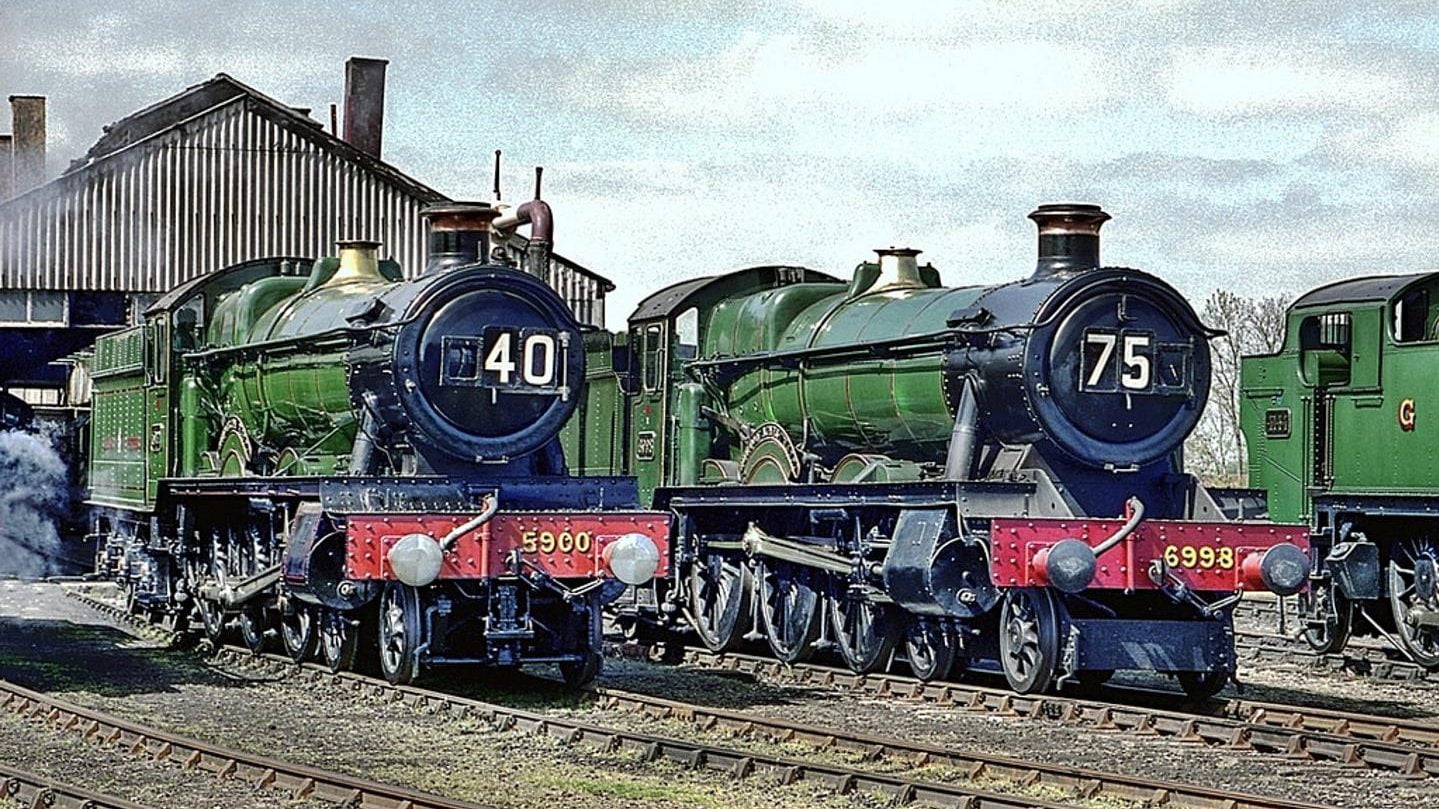 The Great Western Railway’s 4900 ‘Hall’ Class were the GWR’s most numerous 4-6-0 type engines ever built.

They will be the focus of this week’s Class Information, and there 6959 ‘Modified Halls’ as designed and built by Hawksworth. Once looking at their careers, we will look at the amount saved for preservation.

Churchward had designed the 4300 2-6-0 class in 1911 for mixed traffic, but these engines were finding it hard to handle larger trains. Collett wanted a locomotive with the front bogie for stability and chosen to take a 2900 ‘Saint’ class engine and fit smaller 6 foot driving wheels over the 6ft 8in ones carried by the Saints.

The Prototype for the new class chosen was No.2925 “Saint Martin”, which was withdrawn for rebuilding in 1924. This included altering the level the cylinders were fitted in relation to the coupled wheel’s axles and using a ‘Castle’ Class cab type. The engine was put through three years of trialing, undergoing a few changes to improve the design.

The new design proved to be successful, with an order for 80 being placed at Swindon Works in 1928 under Lot 254. Collett made further changes to some dimensions for the first batch of engines. Notably, reducing bogie wheel diameter (3ft 2in to 3ft) and increasing travel for valve setting. The first engine built was No.4901 “Adderley Hall”, emerging from Swindon in December 1924.

Before the first batch of 80 was completed, further orders for more batches had been placed. The Hall proved perfect for mixed traffic duties across the whole of the GWR system where they could operate on. Both day and night, the class could be seen hauling express passenger and freight trains. The South West sheds of Penzance, Truro and Plymouth’s Laira took the first allocation before they were spread far and wide. The GWR’s top shed, Old Oak Common had several members of the class. Their main issue was axle loading of red, leaving the 4300s and smaller engines to haul these duties. This later lead to the design and construction of the 7800 ‘Manor’ and 6800 ‘Grange’ Class.

By the 1940s the conditions that steam locomotives were working in had charged over the decades. On the GWR, WW2 lead to poorer qualities of the coal being supplied to depots. The effect on the Halls being poor steaming. Wartime also meant less maintenance time for locomotives. With both of these factors and the Halls based on Churchward practices used by Collett, the class started to suffer in the 1940s.

Hawksworth, who became CME in 1941, decided to improve the design to coup better in these harsh wartime and post-war years. Although keeping the Hall appearance, Hawksworth made a number of changes to the design and construction of the Modified Halls. Plate frames were used extensively instead of bar frames, redesign of the cylinder casting, new superheater (larger and produced higher temperatures) and arrangement of the draughting layout.

Like the Halls, the Modified Halls were well received. All of the improvements incorporated into the design proved successfully, this being noticed by both footplate and maintenance staff. Having the same Tractive Effort as the 4900s, they were allocated the same duties.

All but one member of both classes survived until the formation of BR, this being No.4911 “Bowden Hall” which was sadly destroyed beyond repair by a World War 2 bomb. As stated in the “Performance in Service” section, the Halls were very useful engines and withdrawals didn’t start until 1959 due to this.

Like most classes, the oldest members are withdrawn first due to their condition. For the Halls, this was No.4900 “Saint Martin”, which over the 52 years between 1907 and 1959 had run an impressive 2,092,500 miles. The last Hall to be withdrawn was No.4920 “Dumbleton Hall” in December 1965, which has also been saved from the scrap heap and is still with us today.

With the Modified Halls being new and improved, they lasted long into the 60s before their numbers were reduced. No.6962 “Soughton Hall” was the first engine withdrawn in January 1963 and scrapped where it was built less than 9 years earlier, Swindon Work. No.6998 “Burton Agnes Hall” was chosen to haul the last Western Region steam train in January

1966, being the last Modified Hall to be withdrawn.

Of the 269 Halls built, 11 have survived into preservation. A large number of engines still present is due to all 11 locomotives being brought as scrap by Barry Scrapyard, who later sold the engines onto new owners who have restored or are restoring the locomotives back to operational status.

Of the 71 Halls built, 7 have survived into preservation. Like the Halls, a large number of class members left is thanks to Barry scrapyard. All 7 members are in all states of repairs, with exact details found below.

We hope you have enjoyed this week’s Class Information. Stayed tuned for the next article in the series.