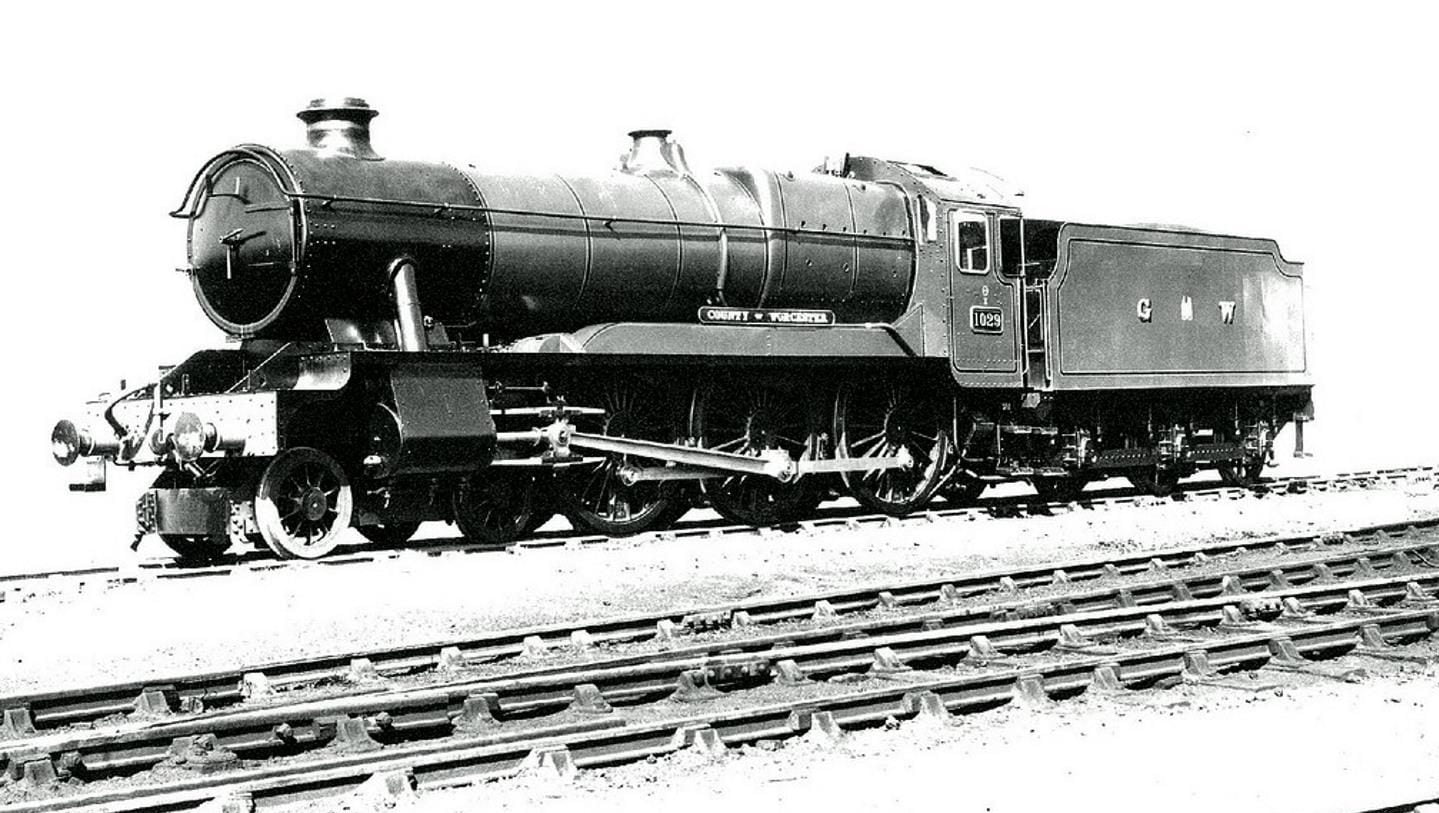 Returning back to a New Build Project focusing on a Great Western Railway (GWR) design, this week, we are looking at 1014 The G.W. County Project and their progress on building a replica 1014 “County of Glamorgan”, of the Hawksworth 10XX ‘Country’ Class. Firstly, we will explore the history of these unique engines, followed by the background to and progress made by 1014 The G.W. County Project.

History of the Hawksworth ‘Country’ Class

Hawksworth became Chief Mechanical Engineer (CME) of the GWR in 1941 when Britain was at War. Keen to build engines with his own design influence, but following wartime restrictions, Hawksworth firstly built the 6959 ‘Modified Hall’ class.

As the name suggests, Hawksworth made changes to the design of the 49XX ‘Halls’ class built by Collett in 1928, producing a new class.

The most significant changes made to the Halls to produce the Modified Halls were all in the front end of the engines. Hawksworth replaced Churchward’s design of frame by using plate-frame for the whole frame, combined with cylinders bolted straight onto the frame, without a smokebox saddle built into the casting.

Also, a new design of superheater, with three rows, was used in order to increase the degree of superheating. This helped improved steaming among engines as coal qualities were becoming poorer.

All these features were used in Hawksworth’s Counties, along with many new designs and features to the GWR. Firstly, a new boiler was built for the class, the Swindon No. 15. The firebox was of London, Midland & Scotland Railway (LMS) design, being the same as the LMS 8Fs.

During the war, Swindon Works was authorised to built 80 LMS 8Fs, with Swindon producing all the patterns to build the engines. Hawksworth used the patterns, with slight changes, to build the Firebox for the No. 15 Boiler. The slight changes were to straighten the boiler to work at 280PSI of pressure. This feature was already being used by bulleid in his Merchant Navy class of 1941.

Other features include straight wheel slashes and nameplate (as used on the streamlined ‘King’ and ‘Castle’), wide cab, double blast pipe and chimney and 6 foot 3 inch driving wheels. The first member of the class, 1000, appeared in August 1945 nameless. Later on, the names of Wales and English Counties were applied to the engines.

Why were the Hawksworth ‘Counties’ built?

Out of all the theories put forward over the years, no definite answer can be provided. Theories include a test design for a possible engine with a 4-6-2 wheel arrangement, provided the GWR with a two cylinder version of a Castle (same power) and a design to call his own. War restrictions only allowed Hawksworth to build more mixed traffic engines, leading him to place an order for, and later approved, a batch of mixed traffic engines with 6ft 3in.

A mixed reputations developed over the years about the Counties. Being a small class with limited information about them, most crews hard to learn the hard way on how to achieve the best performance.

Two main issues with the class were highlighted, steaming problems and rough riding. In time, both issues were improved, by improving draughting arrangements and lowering boiler pressure (280PSI to 250PSI) respectively. Reduced boiler pressure came at a cost of reduced tractive effort, from 32,580 lbf to 29,090 lbf.

Many Counties were allocated to the same duties as the Castles, with the Castle being the preferred engine by most crews. Maintaining pressure seemed to be a problem with the 10XXs, this is unusual as most GWR engines hardly suffered from this. This mainly caused by the design being ‘over-cylindered’.

September 1962 saw the first three members of the class to be withdrawn. Over the next two years, the class grew smaller until the last member of the class, 1011 “County of Chester”, was withdrawn in November 1964 and cut up at Cashmore in Newport, where most engines from the class were scrapped.

Background to the 1014 The G.W. County Project

The Great Western Society (GWS) obtained two key major components, a boiler, and underframe for replica locomotive 1014. The boiler came from LMS 8F No. 48518 and the underframe from GWR ‘Modified Hall’ (Built by British Railways) No.7927 “Willington Hall”.

With both of these components, the 1014 The G.W. County Project was official launched in 2005. Replica 1014 will be built close to late British Railways condition of the Counties, but also following modern building criteria.

The Project has been split into four phases of construction. These are:

Soon after launching the project, a few original County parts were donated, these being:

Among new parts donated were a set of cab side numberplates for 1014.

The most recent update from the project was posted in January, with information on progress made in late 2017. With LNWR Crewe not undertaking any outside work, the project has been looking for a new contractor to overhaul and build 1014’s Boiler.

Currently, it is likely that Heritage Boiler Steam Services (HBSS), based at West Shed, will undertake the work on the boiler. Until a full decision has been made, the parts of the boiler will be stored at Swanwick.

At Didcot, after painting, the axle box links are ready to be fitted. Issues with clearance have arisen, which may need redesign work to be completed. The tender’s tank baseplate has been temporarily fitted. Once the braking system is completed, building the tender tank will begin.

The project still needs many more parts to help build replica 1014 “County of Glamorgan”. A range of parts are available for sponsoring, the full list and details can be found here. Any donation, big or small, will be much appreciated by the project, helping them take one step closer to completing 1014.

If you would like further information or to support the 1014 The G.W. County Project in building replica 1014 “County of Glamorgan”, please visit the project’s website here

We hope you enjoyed this week’s Project Information. Next Friday, we will bring you another New Build Project, a project building a locomotive to a London & North Eastern Railway (or Pre-Grouping) design.