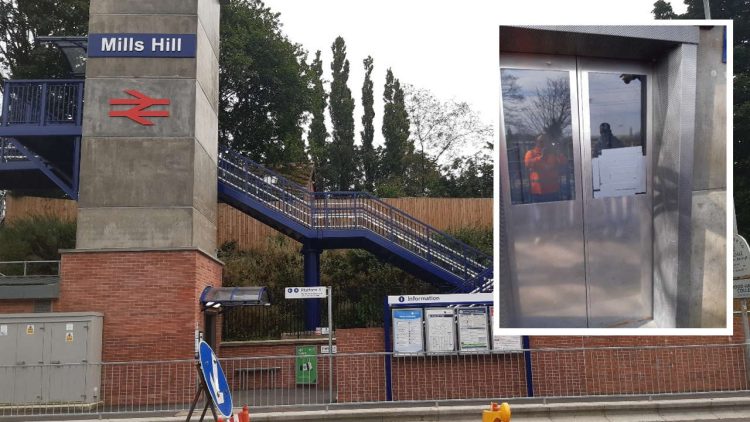 Vandals have kicked in the doors of a new passenger lift at Mills Hill station in Greater Manchester, just 15 months after they were installed.

Millions of pounds were spent making the station step-free to improve access to the railway for disabled people, passengers with pushchairs, and those carrying heavy luggage.

The station upgrade was part of the Department for Transport’s ‘Access for All’ programme, which is a scheme to improve accessibility at railway stations nationwide.

The lifts were only opened in January 2021, but senseless vandals have now kicked the lift doors so hard that the inside and outside doors don’t align, which means that the lift can’t be operated safely.

Glass in one of the doors has also been smashed and has been taped up to keep station users safe.

Fitting new doors will cost an estimated £10,000 and will require the lift to be taken out of service for many weeks.

Phil James, Network Rail’s North West route director, said: “I’m appalled that this careless act of vandalism has cut rail travel off from people with additional needs who we worked so hard to improve Mills Hill station for.

“This reckless crime affects real people who need step-free access to travel and also taxpayers, as the thousands of pounds needed for repairs will come from the public purse. We’re working hard with the lift engineers to get it back in service as quickly as we can.”

Chris Jackson, regional director of Northern, said: “I can’t imagine why someone would take pleasure in causing damage to new infrastructure that is designed to make travel more accessible for all.

“We will do everything we can with Network Rail to get these facilities back into operation as soon as possible.”