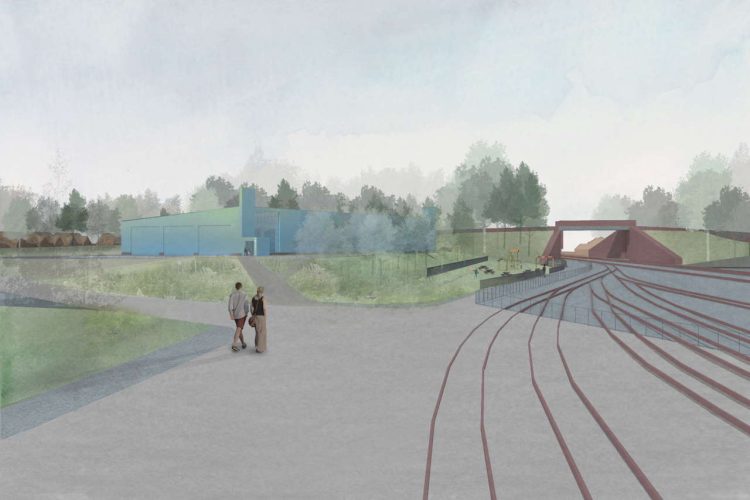 A new £5.9m collection building is planned for Locomotion at Shildon, but before the plans are submitted for planning approval, the public are invited to have their say.

A free exhibition is being displayed at the museum where visitors and the public can have their say on the plans.

Designed by AOC Architects, the new building was originally due to open in 2022 but was delayed as a result of the pandemic.

The exhibition will be on show at Locomotion from Wednesday, 19 to Sunday, 23 January.

On 19 January between 15.00 and 19.00 there will be a face-to-face open session where members of the project team will be on hand to answer questions and to explain the plans. A further drop-in session will be held at Shildon Library on Monday, 24 January from 11.00 to –15.00. The exhibition will also be available to view online from 19 January to 31 January at http://Locomotion.org.uk/newbuilding

Exhibition dates may be affected by changing Coronavirus restrictions and visitors should check online in advance. All comments on the plans should be submitted by 31 January.

The collection building will cover 2000 square metres and is expected to open in 2023, well in time for celebrations planned to mark the bicentenary of the Stockton & Darlington Railway in 2025.

The building is central to a programme of improvements taking place at Locomotion as part of the National Railway Museum’s ‘Vision 2025’ masterplan. These include repairs to the site’s historic buildings, the display of the original Locomotion No.1, and relocating the historically-significant Gaunless Bridge which was a railway bridge on the Stockton & Darlington Railway completed in 1823 and one of the first railway bridges to be constructed of iron.

In addition to the 87 vehicles already on display at the museum, the new building will house up to another 45, creating one of the world’s largest collections of rail vehicles.

The new development will also provide new opportunities to tell the story of Shildon as the world’s first railway town, including examples of the exceptional importance of coal to the development of the area and the town’s post-war railway history. Several vehicles built in the Shildon Works will also go on display.

The museum has received a share of £3.5m regional ‘Levelling Up’ funding following a successful bid by Durham County Council. This will go towards upgrading the visitor car park, assisting with landscaping, and further repairs to the historic coal drops.

Dr Sarah Price, Head of Locomotion, said: “I am excited to share our latest plans for Locomotion’s newest collection building which will give our visitors a better experience and create a safe and sustainable environment for our collection.”

“This project will help us move towards our goal of achieving net zero carbon across the site and the new building will enable us to display an additional 45 vehicles from the national collection. This will create a lasting legacy for the area as we celebrate the bicentenary of the Stockton & Darlington Railway in 2025.”

Cllr Elizabeth Scott, Durham County Council’s Cabinet member for economy and partnerships, said: “We are approaching a significant year in our county’s history with the upcoming bicentenary of the Stockton and Darlington Railway. Locomotion has some truly exciting plans in place to celebrate this key milestone, including the new collection building. This will not only revitalise the site and attract more visitors but also showcase the dynamic culture and rich industrial heritage of County Durham, which is a key reason why the county is bidding for UK City of Culture 2025. I hope visitors will get involved and give their views on this exciting new proposal.” The East Lancashire Railway (ELR) has announced a wide programme of exciting events on the railway for this...