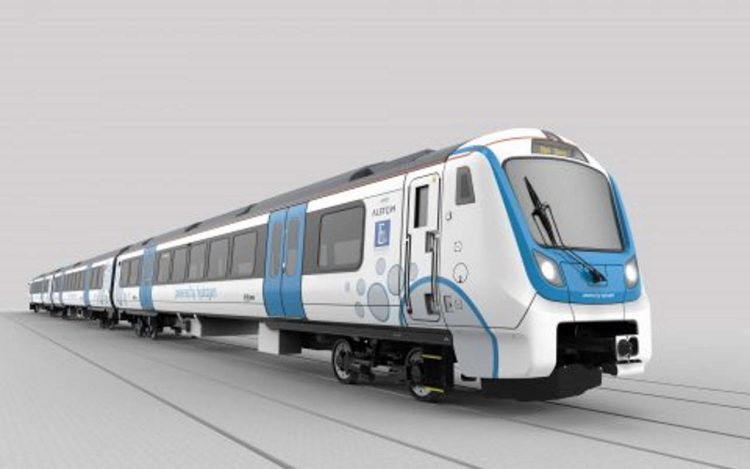 Alstom and Eversholt Rail have signed an agreement for the UK’s first hydrogen train fleet.

The new co-operation agreement aims to provide an initial fleet of ten hydrogen trains, which will help the UK and Scottish Government’s ambitions to decarbonise rail.

Alstom has already produced a hydrogen-powered train, the Coradia iLint which is in operational service in Germany.

Working together, the two companies have agreed to share technical and commercial information to enable Alstom to design, build, commission, and support a fleet of ten three-car hydrogen multiple units (HMUs).

The new trains will be built by Alstom in Britain and based on Alstom’s latest version of its Aventra platform.

The Aventra was developed for a range of operations ranging from high-capacity metro systems to intercity services, and designed to be fast, smart, and economical. They are also modular in design, from carriage length to interior layout and design, and can easily be modified for different requirements while retaining core benefits, such as being lightweight and having low lifecycle costs. It is intended that final contracts for the fleet will be signed in early 2022.

Alstom and Eversholt Rail previously worked together on a project for a hydrogen-powered train that would convert an existing Electric Multiple Unit to run on hydrogen power. That was named the ‘Breeze’ project, and both companies now believe that there is a market in the UK for a fleet of new hydrogen-powered trains.

Nick Crossfield, Alstom’s Managing Director, UK & Ireland said: “COP26 is a reminder of just how urgent the need to decarbonise our world is. Rail is already the lowest emission transport mode, but we can do even more, and I am delighted that we have concluded this agreement with our friends at Eversholt Rail which will lead to Britain’s first-ever fleet of new hydrogen trains.”

Mary Kenny, Eversholt Rail’s CEO said: “It is important that we start sooner rather than later to decarbonise UK Rail if we are to meet the 2050 ‘net-zero’ target. Hydrogen propulsion will play an important role, and this project with Alstom will demonstrate how the private sector can work together to make a difference.” Avanti West Coast has confirmed that it has returned 2 Class 221 Voyager trains to its owning company,...