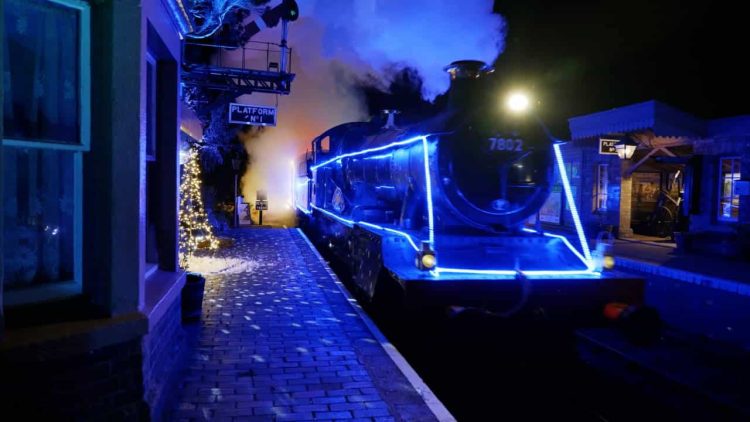 The Severn Valley Railway’s Christmas services run from 19 November until Christmas Eve and are selling fast.

With some services already sold out and limited availability on some others, the railway is hoping for a bumper Christmas season.

The railway is running a number of Christmas experiences, including “Steam in Lights” services, which see trains adorned with thousands of glittering lights as they travel through the winter evenings.

Services depart from Bridgnorth, starting on 19th November, and this is its third year of operation.

Organisers promise that it will be bigger and better than ever.

Events manager Lewis Maddox explained, “We have double the number of lineside displays, everyone will be astounded by the magic, and we’re delighted to be working with a local performing arts company on the entertainment for Steam in Lights, as well as our other Christmas services.”

At Bridgnorth station, Bridgnorth-based Reach Out Arts will provide pre-departure entertainment for Steam in Lights.

Reach Out Arts has been collaborating with the SVR for several years, and as well as the Bridgnorth entertainment, they will be presenting a Christmas show at Arley that forms a central part of the Santa Train experience.

This year, the company also developed the script for a brand new “Enchanted Express” experience, which has been recorded by Dame Julie Walters in readiness for the event.

The Carol Train services also feature a festive concert at The Engine House, Highley, which has a number of interactive exhibits, including up to eight steam locomotives, a magnificent royal carriage, a ‘how the SVR works’ exhibition, and a café. Either 70000 Britannia or 34046 Braunton is set to haul part of The English Riviera Express this Saturday,...