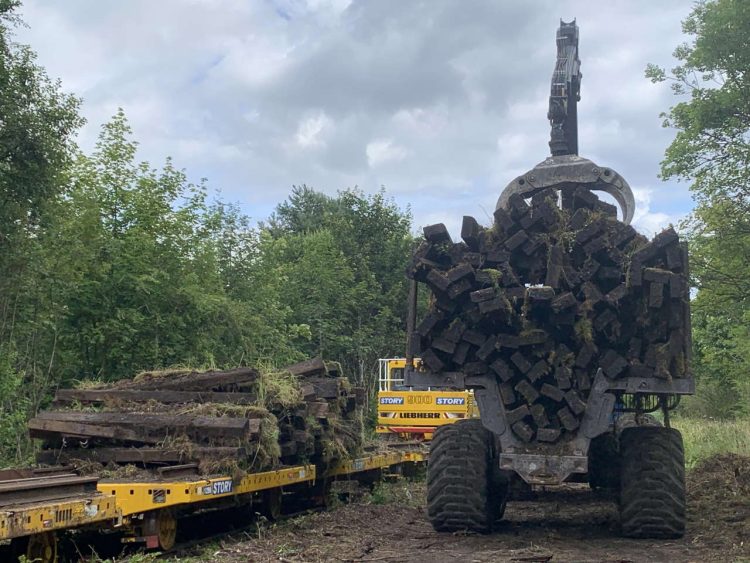 The Levenmouth rail link project has taken a significant step forward with the removal of the old disused track and redundant infrastructure from the former branch line.

The removal of the life expired and unused railway equipment along with the excavation of the old ballast is making a clear path for the next steps of the major project which will see the construction of new lines and is set to start during the early part of 2022.

The removal was undertaken from west to east and saw a team of 10 to 12 people using an excavator and trailer.

Before the removal work could take place, necessary environmental and ecological surveys were undertaken to identify any protected species or nesting birds in the area. Appropriate methods of working were put in place with the aim of the project to proactively identify and safeguarded species, roosts and habitats.

Part of the project includes a commitment to keep its carbon footprint to a minimum whilst increasing its environmental sustainability, and as part of the promise, 100% of the removed track will get reused, recycled or repurposed.

Following its removal, the redundant equipment was itemised and then offered to a number of heritage railways. The heritage railways included Leven Heritage, Shed 47 Dunfermline Caledonia Heritage society and Boness Heritage railway, who have all received large quantities of track and sleepers and will provide a positive impact on their respective projects.

The next steps for the Levenmouth rail link project will see numerous trial boreholes sunk along the 5 miles route. Ground testing will also take place to locate any contamination.

This vital information will inform the design development and the construction approach used as the project moves forward to on-site work early next year.

Joe Mulvenna, Network Rail project manager for the Levenmouth Rail link said: “This is the most significant phase of preparatory work so far on the project and we are literally clearing the way for the start of construction early next year.

“While clearing the old track breaks a link with the past, its important that we can re-use and recycle the redundant assets for use on heritage railways and some can be repurposed for the new line.

“It’s great to see local groups benefit from what was a redundant asset and to know the old Levenmouth railway will again serve passengers on the heritage railways, including locally in Fife.” Numerous incidents of trespass have taken place in recent weeks on the railway near Lelant railway station in...