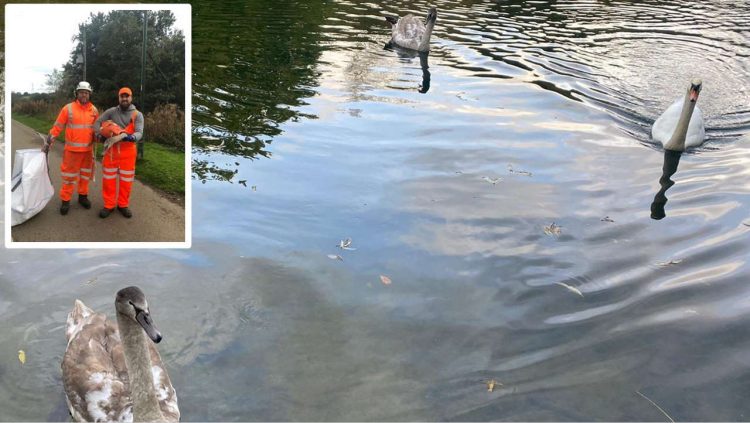 Track workers in Staffordshire have rescued two baby swans who lost their mother and found their way onto the railway.

An eagle-eyed member of the public was the first to spot one of the cygnets on the track and alerted Network Rail workers Steve Brough and Daniel Deaville who luckily were working nearby.

Steve and Daniel managed to capture the confused cygnet and return it to its mother on the lake at Bathpool Park near Kidsgrove.

On their return to work, Steve and Daniel found a second cygnet which was frightened and hiding in the ferns right next to the railway.

The pair of works soon spotted that the poor cygnet had an injured wing so immediately called the RSPCA for assistance and waited with the young bird until they arrived. The cygnet was taken to a vet for treatment.

Steve Brough, works delivery technician at Network Rail, said: “Many of us in my team are animal lovers. These stranded cygnets were obviously distressed having not only lost their mother but strayed into a dangerous and loud environment.

“It must have been really scary for both of them. We’re really glad to have got them safely away from harm.”

Jackie Hickman, inspector at RSPCA said: “The men were absolutely fantastic and went above and beyond for animal welfare. Both of the cygnets were angry and hissing quite a lot, but they managed to capture them safely and calmly and get them off the line. They stayed for a long time, late on a Thursday night to do this, and we would like to thank them for the enormous care and dedication they showed.”