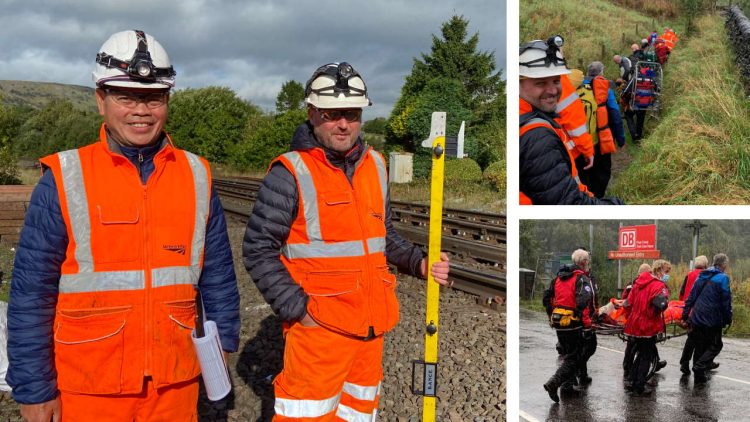 Colin Phillips and Rolando Navarro are the two heroic Manchester-based track-workers who heard cries for help whilst working on a set of points at Peak Forest in Derbyshire on Thursday the 30th of September.

As the men were working, they could hear the calls and see a single-arm waving through the grass of 81-year-old Denis who had been out picking blackberries for his wife.

Denis had slipped and fallen down an embankment and with the weather set to get worse the two rail workers jumped into action raising the alarm.

Shortly after paramedics along with the Buxton Mountain Rescue Team arrived. Denis by now, was wet, cold and exhausted having been alone for around 20 minutes and unable to get on his feet due to the muddy conditions. Luckily, the fast actions of the Network Rail workers meant Denis managed to avoid becoming hypothermic.

Buxton Mountain Rescue carried out an impressive rescue with the team carrying Denis out using a stretcher. Denis was then checked over by a paramedic in the warmth and comfort of his own home before being given a clean bill of health.

Denis and his wife Janet can’t thank those involved in the dramatic rescue enough. The couple, who have been married for 60 years and celebrated their diamond wedding anniversary in August, sent biscuits and chocolates to Colin and Rolando as a thank you and also made a donation to the Buxton Mountain Rescue Team to thank them for their help.

Denis said: “I shall be forever grateful to Colin and Rolando for the help they gave me. They both stopped with me until the mountain rescue came and kept me chatting to me to keep my spirits up. I got a telling off from Janet, she told me not to go down there as she knew how bad my legs were and I just slipped and couldn’t right myself. It’s a good job somebody was there to help and I’m grateful it was them as they really looked after me.”

Colin Phillips, Network Rail principal technical officer, said: “Well this certainly isn’t a day at work I’ll forget in a hurry! When the mountain rescue turned up with around 20 people with all the gear it was pretty impressive watching them work and get Denis to safety.

“The paramedics said his body temperature was a couple of degrees above hypothermia so had we not found him it might have been a different story I’d be telling. I’m just so glad that we were able to help get Denis back to Janet, unfortunately without any blackberries, but safe and well!”

Rolando Navarro, Network Rail senior technical officer, said: “Denis could have been there for quite a while as this is a remote area but luckily, we were doing a special inspection and it’s a just coincidence that we were there just when he needed our help.

“I stayed with him until the mountain rescue teams arrived and we kept him chatting and he soon perked up. We feel good that we helped somebody in distress, and we would do the same thing again, and hope that if we were in that position, someone would do the same for us too.”

Artwork at Ledbury Railway Station shows off the towns heritage

A Southeastern employee has recycled 3,000 used train tickets to give Ashford International station a festive feel.