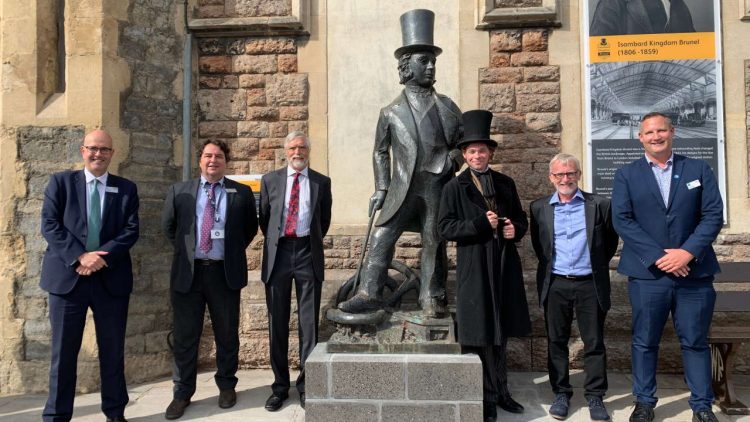 Network Rail has announced that a statue of Isambard Kingdom Brunel has been unveiled at Bristol Temple Meads.

The statue by John Doubleday celebrates Brunel and is now located outside the building which he designed and which was part of the original Great Western Railway (GWR) terminus station building at Bristol Temple Meads.

Originally presented to the city of Bristol by the Bristol and West Building Society the statue was unveiled on the 26th of May 1982 on Broad Quay. The statue was later moved in 2006 to Broad Quay to celebrate the bicentenary of Brunel’s birth.

In its new home, the statue of Brunel is fittingly located outside the iconic station building at Bristol Temple Meads and is rightly connected to another statue of Brunel, also by John Doubleday, at London Paddington station at the eastern end of his great railway.

As one of the most ingenious and prolific engineers of the 19th century, his incredible designs include the Clifton Suspension Bridge and the SS Great Britain, which was the world’s first iron-hulled, screw propeller-driven steamship and is now docked in Bristol.

Appointed as GWR’s chief engineer in 1833, Brunel began work on the line that still links Bristol with London to this day. The creation of this line included the building of viaducts at Hanwell and Chippenham, the Maidenhead Bridge and the Box Tunnel and the Bristol Temple Meads station being one of his most celebrated achievements.

Bristol Temple Meads’ railway opened in 1841, transforming the city of Bristol and making both business and leisure travel more affordable and accessible. The railway also created jobs for thousands of people.

Network Rail are continuing Brunel’s legacy through the Bristol Rail Regeneration programme which they have invested greatly in the railway at Bristol and Bristol Temple Meads station in a bid to future proof rail travel which supports millions of passengers who use the railway and station each year.

“The statue is spectacular and is accompanied by a wall plaque which tells the story of Brunel and his original station. It is fitting that passengers entering and leaving the station via station approach road will be able to enjoy the statue and understand the history of Bristol Temple Meads and the role Isambard Kingdom Brunel played in shaping the railway we know today.”

Tim Bryan, Director of the Brunel Institute at Brunel’s SS Great Britain said: “It is wonderful to see the relocated statue greeting passengers and Bristol people at Temple Meads. Brunel’s iconic GWR terminus remains as an enduring symbol of Bristol’s rich railway heritage and the connectivity, creativity and innovation of the city, which continues to inspire future generations of engineers and entrepreneurs.”

Chris Curling, Deputy Lieutenant for Bristol who unveiled the statue, said: “There can be no more appropriate a location for this magnificent statue of Brunel than immediately outside the very building which he designed and built as the first full-scale railway terminus, and which became the template for railway stations across the world.”