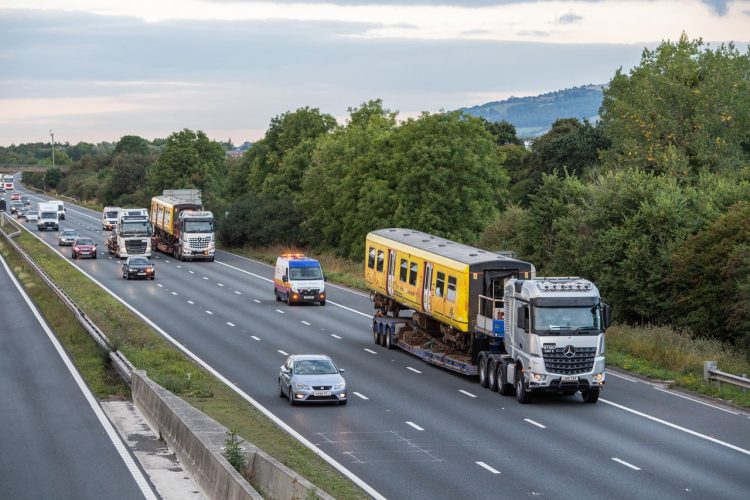 Rail Support Services has told RailAdvent that they have assisted in transporting a damaged Merseyrail Class 507 train to the docks ahead of being dismantled.

The Angel Trains Class 507 worked on Merseyrail services and was unfortunately involved in an incident that took place at Kirkby Station in March this year. Substantial damage was caused to the leading car impacting on the driving cab and draw gear.

The unit was initially transported to the nearby Kirkdale depot, which is where the Merseyrail fleet is maintained, where the choice was made to withdraw the unit especially as the new class 777 will soon replace the 507 fleet. The unit involved in the incident was the first of the class ever to be withdrawn.

The initial removal of the unit had to be carried out by rail as there are no suitable roads able to access the depot and this meant that Railway Support Services (RSS) needed to fix the damaged draw gear to allow the set to be moved top-and-tail to Peel Ports’ Alexandra Dock in Liverpool before it could be moved by road to Sims Metals at Newport Docks.

The journey to Peel Ports took approximately two hours and was carried out at 1.30 am on Thursday the 16th of September with an RSS engineering team travelling with the unit.

The unit was through-piped by Rail Operations Group (ROG) by class 57’s, 57310 and 57312 at either end of the unit. The class 57’s provided adequate braking for the consist which included the un-braked EMU and carried out four reversals over the short two-hour trip.

Andrew Goodman, Managing Director of RSS commented: “This was a complex operation involving several parties co-operating to get the transfer completed.

“We are deeply grateful to everyone involved. It is a shining example of how the rail industry can work together on a project that took some time to arrange with several organisations playing a part. In the event it was a very smooth, safe and trouble-free transfer. ROG organised the move for us over the short distance to Peel Port, involving four reversals to reach the loading point.

“Perhaps this story will answer passing drivers questions: the units were beyond economical repair and were on their final journey to be recycled.”