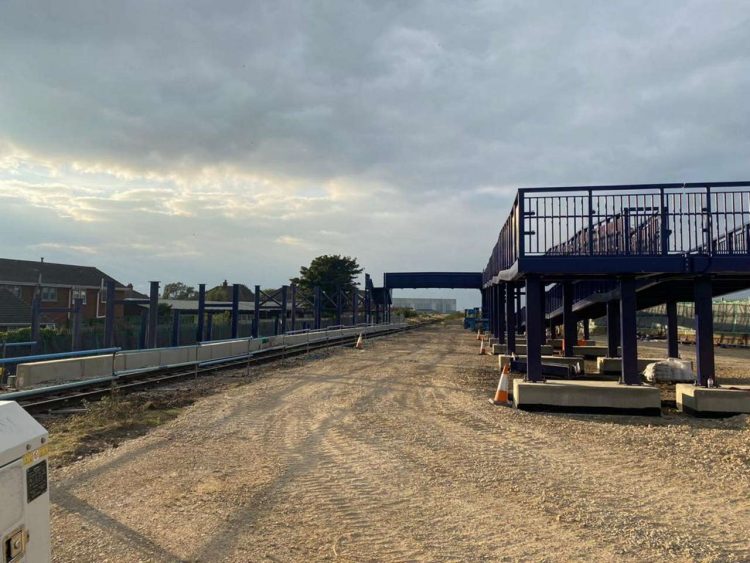 During the weekend of the 25th and 26th of September, Network Rail engineers moved the bridge structure into position, along with the fitting of the ramps to the promenade side as part of the £3.6 million project for the well-loved seaside town.

Funding for the project has been provided by both Network Rail and the Department for Transport.

The new footbridge was manufactured off-site to keep disruption to a minimum for the local community. When fully complete, the bridge will include both stepped and ramped access to both sides and will bring back easy access for locals and visitors to the popular Cleethorpes beachfront.

The rest of the structure is set to be installed along with lighting during the next few months in this fast-moving project. Landscaping work will also be undertaken leading up to the bridge with walkways also being created.

Following plans being approved by North East Lincolnshire Council, the project got underway during June 2021 with completion expected as soon as December 2021.

A Network Rail census revealed an average of 570 pedestrians and cyclists using the crossing each day. Alternative access was proposed in the form of the new footbridge and once fully installed, is expected to be very well used.

Matt Rice, Route Director for Network Rail’s North and East Route, said: “We’ve made great progress over the weekend to get a section of the new footbridge into place. I know the local community will be keen to see access over the railway at Suggitt’s Lane restored as soon as possible, and so we’re moving at pace with the project.

“We want to thank everybody in the community, as well as any passengers who were impacted, for their patience whilst this important stage of constructing the new bridge took place. We’re continuing to work closely with North East Lincolnshire Council to complete this project by December.”

Cllr Stewart Swinburn, Cabinet member for highways and transport at North East Lincolnshire Council, said: “Things are obviously moving on quickly now with the bridge build, and like many others, I’ll be pleased to see it in place to reconnect our community in that area with the seafront – something that’s been missing for a while now.” Two teenage girls have been captured on CCTV doing handstands on the track at a level crossing in...