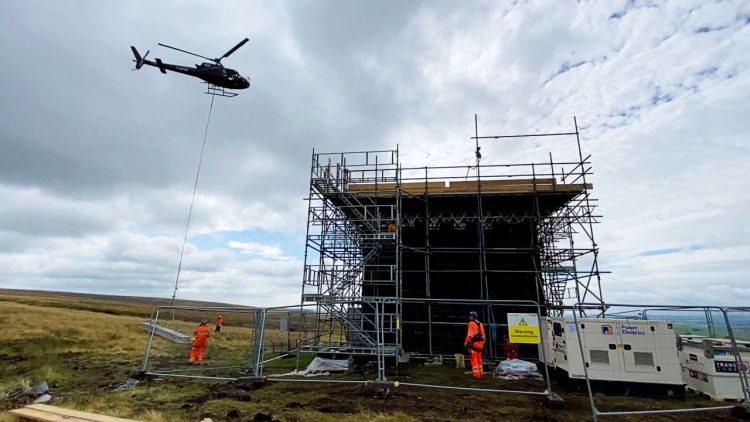 Network Rail has used a helicopter to transport materials that are being used to repair Cowburn tunnel in the Peak District.

The unusual delivery method was vital to the complex work being undertaken to Cowburn Tunnels ventilation shaft. The tunnel which was originally engineered by Midland Railway and is located on the scenic Hope Valley line and lies between Edale and Chinley passing under key peaks and close to both Kinder Scout and Mam Tor.

Cowburn tunnel is not only in a remote location but is also one of the deepest railway tunnels in the country and this presents the need for unusual solutions when it comes to maintaining the Victorian subterranean structure. Helicopter pilots were employed to move the key materials and parts so that the essential work could be carried out.

Work began on the ventilation shaft in 1894 and took 2 years to complete with 102 men working night and day to excavate, mason and brick the shaft. The tunnel was dug vertically a massive 241 metres into the hillside and is one of the countries deepest ventilation shafts, to get an idea of the depth of the tunnel if it were a building it would be even taller than Canary Wharf in London.

For almost 130 years, the shaft has been supplying air to the tunnel sat 250 metres below, the shaft has also unintentionally acted as if it were a massive drainpipe. When rain falls it makes its way through the soil and eventually makes its way to the ventilation shafts brickwork gushing water like a huge shower into the tunnel and onto the tracks.

Network Rail engineers have created a solution to this issue by putting in place a state-of-the-art system of drainage pipes which collect the water in a controlled way, which is then redirected into drains within the tunnel. The innovative system will not only keep the 127-year-old brickwork safe, but will also lessen any risk of future delays caused by water leaks for passengers or freight on the busy Hope Valley line.

The impressive installation of the pipes and water collecting facilities was achieved by creating a temporary lift platform to work from which utilised winches and pulleys. In an approach similar to their Victorian predecessors, the Network Rail teams were lowered into the shaft using a custom-made cradle, using this method meant that trains could continue running as normal without the need for disruptions to passenger and freight services. However, drainage improvement work at track level had to be completed on Saturday nights when trains were not running.

The essential work was carried out by Network Rail as part of the £800,000 investment for the Great North Rail Project, with the work starting during August 2021 and finishing this week.

Dennis McGonnell, Network Rail works delivery manager, said: “It’s a huge privilege to keep heritage structures like Cowburn Tunnel in good condition for rail passengers and freight and it’s amazing to see up close the quality of the Victorians’ workmanship.

“We work on a lot of structures in remote locations but working in a tunnel this deep and using helicopters to get materials to the site is rare. It makes you realise what an amazing feat of engineering building this tunnel and ventilation shaft was all that time ago without the modern machinery we have today!”

Archaeologists working for HS2 have uncovered a vast Roman trading settlement at Blackgrounds near Banbury in Northamptonshire.