Laser mapping technology allows for pouring of under water concrete to protect viaducts on the West Coast mainline. 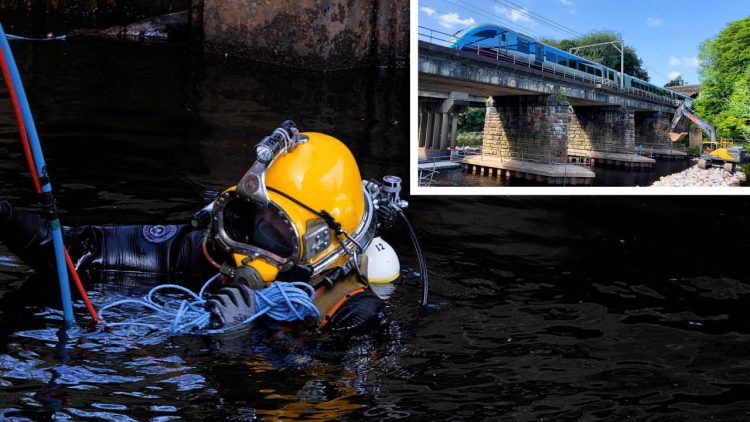 The underwater concrete is being poured by specialist divers and will protect two main viaducts which support the West Coast mainline in the Carlisle area.

Network Rail completed comprehensive laser surveys which revealed that fast flowing water from the River Eden has led to areas of the riverbed washing away, which has created a potential risk for both of the viaducts foundations. Due to the state of the riverbed, trains have had to run at a reduced speed of 20mph across each of the structures, one which is Victorian and the other built during the 1940’s.

Professional divers will pour around 900 tonnes of special setting concrete to build a stable platform for the viaducts columns or piers. This current work is being undertaken as part of a £1.3m Great North Rail Project investment.

The initial part of the work will finish during the next few weeks, with trains able to run over both viaducts at a full speed of 100mph. The increase in speed will mean trains will be able to provide a faster and more reliable journey for customers and freight.

Scour Protection Ltd, who provided the professional diving team, are experts at working in challenging conditions and dealing with projects such as shoring up underwater bridges and viaducts around the UK and further afield.

The working conditions in the River Eden are very poor due to the low visibility of the water, which has meant that most of the work has had to be completed by touch alone. Over 2,200 tonnes of rock have also been placed into the river, which calmed the waters and also redirected the course of its flow, which has enabled the dive team to work beneath the surface.

The ecology team at Network Rail have been working hand in hand with the Environment Agency and Natural England and have maintained monitoring of the river to keep any impact to an absolute minimum.

The concrete being used for the project is wildlife-friendly as it is made up of a mixture using ‘zero leaches’ which means that it is safe for the environment.

Part two of the project will see both viaducts being strengthened and will begin during the summer of 2022, with the work being a permanent remedy to the riverbed erosion.

Chris Pye, Network Rail infrastructure director for the North West, said: “It’s not every day you call in diving teams to help improve railway lines, but this work is essential to keep passenger and freight trains moving on the West Coast main line over the River Eden in Carlisle.

“After using the latest laser mapping technology to give detailed scans of the riverbed we brought this work forward so we could secure this crucial rail link between England and Scotland for the winter ready for the second phase of work next summer.” Network Rail is reminding passengers between Rochdale and Hebden Bridge of changes to services whilst an essential upgrade...