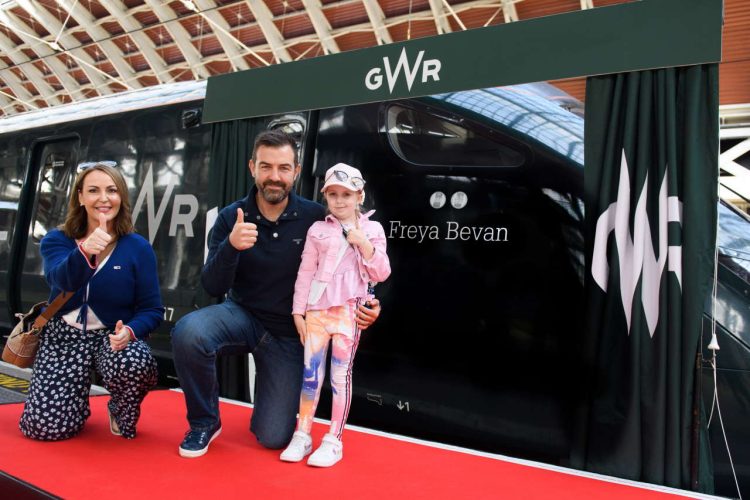 Freya who is battling her third brain tumour got to unveil the name of the Intercity Express Train 800317 at London Paddington before heading back home on her namesake train to her hometown of Neath.

Great Western Railway (GWR) chose Freya as a winner of their campaign to recognise past and present heroes throughout their network.

Other people to be honoured by GWR include Her Majesty Queen Elizabeth II, Welsh sporting legends Sir Gareth Edwards and John Charles along with Paddington Bear author Michael Bond.

Freya also got to meet actor and children’s author David Walliams following her nomination for a Pride of Britain Award.

When Freya was just a baby, she was diagnosed with a Primitive Neuroectodermal Tumour (PNET) and went through a pioneering treatment in America following her family undertaking fundraising and achieving an incredible £110,000 to enable the trip.

In October 2020, an MRI scan sadly revealed a new tumour had grown meaning that Freya needed to return to America for further Proton Beam Therapy with the same doctor who had treated her before.

Since returning from America, a new tumor has emerged and is growing rapidly. Freya is now starting a new drug from Germany which has the capability to reduce the tumour, but at a huge cost of £1,000 a week.

Freya’s family once again have begun another round of fundraising and anyone wishing to support the family can visit the Go Fund Me Page.

Freya said: “Having a train named after me has made me feel really good and happy and special.”

Freya’s mum Katherine, said: “For Great Western Railway to recognise Freya as a Great Westerner means so much to all of us. People have recognised her great strength and determination she’s a real inspiration to so many.”

GWR Head of External Communications Dan Panes said: “Our Great Westerners campaign celebrates remarkable people from across our network and Freya is a brilliant example. She has shown such courage throughout her young life and we are proud to name one of our IETs in her honour.”