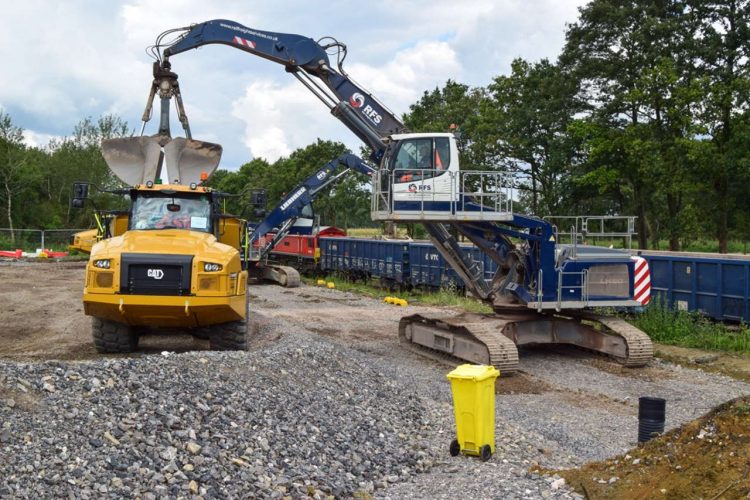 This week has seen a new railhead open near Calvert in Buckinghamshire as part of HS2, and will allow an additional 150 aggregate trains to deliver materials for the massive project. Using rail to deliver material will save 8,300 tonnes of carbon, which is comparable to taking 24,000 lorries off of the road.

When complete, HS2 will run by Calvert in a long 2.5-mile-long cutting which will virtually follow the route of the disused Great Central Railway. The route will feature a spur to a new Infrastructure Maintenance Depot where engineers will maintain and repair the line.

The brand new depot will create approximately 180 jobs in the local community, and will be located right next to the new East-West Rail line, which is being opened in phases from Oxford, Milton Keynes, Bedford and Cambridge. The East-West Rail line was closed during the 1960s but is now being reinstated and will cross HS2 slightly north of Calvert.

369 Freight trains have used the Calvert railhead which means by the end of 2021 over 840,000 tonnes of building materials will have been transported which is comparable to taking 84,000 lorries off of the roads and will save a massive 29,000 tonnes of carbon.

HS2’s main works contractor and undertaking construction are EKFB which is a group made up of Eiffage, Kier, Ferrovial and Bam Nuttall.  The group are providing 80km of central section for the route along with 17 viaducts, 81 bridges and three ‘green tunnels’ which will provide 4,000 jobs during the next 48 months, with trains for the project are being operated by DB Cargo and Hanson.

Throughout the entire HS2 project, 15,000 freight trains are planned to be used carrying 10 million tonnes of aggregate to project sites, which is again comparable to removing 1.5 million HGVs off of UK roads.

HS2 Ltd’s Senior Project Manager, Paul Marshall said: “We’re making strong progress at Calvert and the opening of the new railhead means that we can continue to deliver huge amounts of materials by rail – taking trucks off local roads and reducing disruption for the local community.

“We’ve been working closely with Network Rail, EKFB and the Freight Operators for a number of years to make this possible, and to deliver not only low carbon journeys for our passengers, but also cut carbon in construction.”

EKFB Operations Director, Peter Bimson said: “We are delighted to be at the forefront of carbon reduction in the construction industry, and bringing this aggregate into Calvert by train instead of road is not only more efficient, but significantly reduces our impact on the environment.

“Removing thousands of HGVs from the roads in the Calvert area also demonstrates our commitment to the local community in delivering EKFB’s section of the HS2 project with as little impact as possible.” A giant factory and training complex is being constructed at Kingsbury in Warwickshire for HS2.