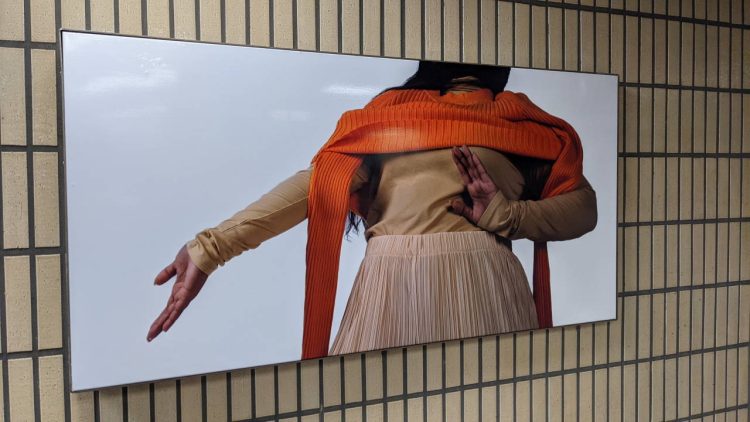 ScotRail Foundation Cultural and Arts Fund has provided funding of almost £5,000 for a new art installation by contemporary Glasgow based artist Stephanie Black-Daniels.

The installation is located at Glasgow Central Low Level station.

The piece titled ‘Angled arm and hand signals’ is in recognition of the low level station location which is sited on the former Alston Street Theatre which was positioned there from 1764 to 1780.

Contemporary artist and performance artist Stephanie Black-Daniels was inspired by the story of George Anne Bellamy who refused to cancel her performance as a mark of defiance following an angry rabbles attempt to burn the theatre to the ground due to its morality.

The outraged mob succeeded in destroying clothes and props but Mrs Bellamy a hugely popular actress of the time was not deterred and in an act of solidarity the women of Glasgow pulled together to replace Mrs Bellamy’s wardrobe allowing her to go on with the show. Sadly the theatre was burned down in 1780 once again in suspicious circumstances.

The Cultural and Arts Fund has funded a total of £196,029.58 to groups and individuals throughout Scotland over the past 7 years. ScotRail in the Community initiative is part of the ScotRail Foundation with a focus to empower local communities to create a positive difference to their local area.

Applications for work in the area of the train station were taken throughout Scotland in a bid to fund arts, community recreation or sports activities in the areas surrounding Glasgow Central or with a travel or safety inspired theme.

Kathleen Mcgee, ScotRail General Manager at Glasgow Central, said: “It’s great to see a tribute to the heritage of Glasgow Central Low Level station paid in such an artistic way, and I’m sure the artwork will brighten up our customers’ journeys.

“We know how important the railway is to the communities we serve, and we want to do all we can to strengthen and support that link.”

Stephanie Black-Daniels, Artist, said: “When the opportunity arrived to respond to Glasgow’s iconic Central Station, I was particularly drawn to the history of the Alston Street Theatre, as it really struck a chord with my own arts practice.

“I utilised my background in sculptural, performance based and collaborative art to create a series of photographic prints for the station, working with a range of women from Glasgow to pose in various imagined theatrical tragic poses.

“It’s a great achievement and honour to present in such a historic building and I hope it will be a talking point for the visitors of the station.”