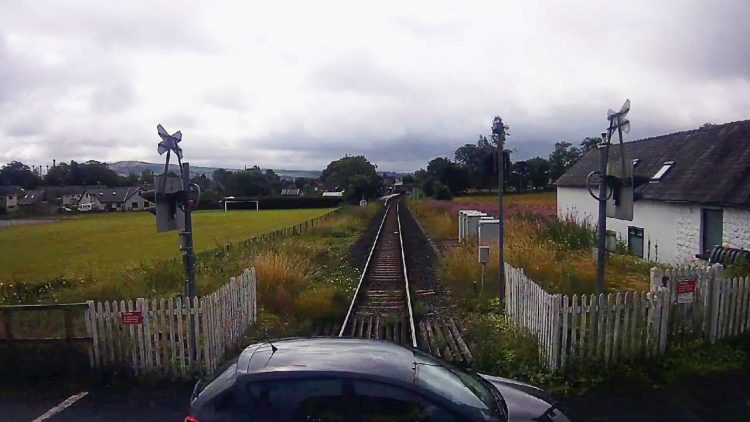 Network Rail has released a shocking CCTV video of a car travelling over a level crossing in the Lake District while the red lights were flashing.

The car passed directly in front of the train, travelling on the Windermere branch line at Burneside.

Luckily the car made it across without colliding with the Northern Train, however it was so close to being hit that the camera only captures the roof of the car as it passes over the tracks.

The incident took place just after 9am on the 29th of July and senior train railway staff say it is one of the closest near misses they have seen.

The footage has been released by network rail as a safety warning to drivers to remind them of the dangers of level crossings.

Drivers should always be prepared to stop at crossings and be ready to obey the signals and lights.

Simon Shipperd, level crossing manager for Network Rail, said: “Not only did this car driver put themselves in serious danger, they also put the train driver and passengers at risk too.

“This is careless driving on a shocking level. Our advice is simple – however tempting it is to jump the lights – don’t do it – you’re putting lives at risk.”

Chris Jackson, regional director at Northern, said: “It’s unbelievable that anyone would take such risks at level crossings.

“The potential impact of such a risk is catastrophic and it is only through good fortune that this incident did not result in something far more serious.

“It is vital that road users and pedestrians respect crossings and follow all instructions to ensure they are used safely. When people refuse to follow the rules we will continue to work with Network Rail and British Transport Police to help trace those responsible.”

Network Rail have a dedicated page all about level crossing safety which can be seen here.