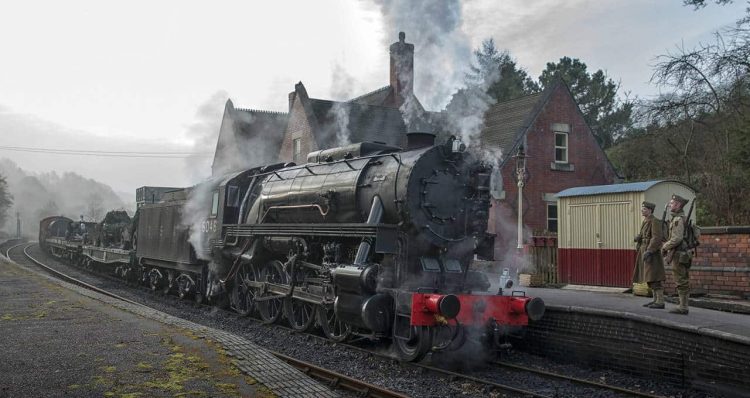 The Didcot Railway Centre has announced that USATC S160 No. 6046 will be paying them a visit as part of the major celebrations to mark The Great Western Society’s 60th Anniversary.

Six locomotives will be in action on Saturday 31st July and Sunday 1st August.

6046 will be visiting the Didcot Railway Centre from the Churnet Valley Railway , with her visit recalling the days when six S160s were based at Didcot in 1943-44.

August marks the 60th Anniversary of four schoolboys launching an appeal to save a GWR locomotive from scrap. The appeal led to the creation of The Great Western Society, the charity that operates the Didcot Railway Centre.

The gala locomotive lineup will include Lambton No. 29, visiting from the North Yorkshire Moors Railway, 1340 Trojan, fresh from its overhaul and 2999 Lady of Legend.

Additionally, two diesel locomotives will play their part with Class 14 D9516 and 08604 Phantom to take a turn on passenger works.

Graham Hukins, Head of Visitor Experience & Marketing commented “We’re keen to welcome 6046, as the S160 Class is one of the few types of engine that were based at Didcot in Great Western days that have not made an appearance here during the Society’s 60-year history.

“It is three-quarters-of-a-century since American 2-8-0s were allocated to Didcot as part of the US lend-lease programme during the Second World War, “ he added.

In addition to passenger trains, goods trains and turntable demonstrations will take place.

Tickets are limited and must be booked in advance on the Didcot Railway Centre website. The Churchward County Trust has announced that they now own a variety of key components required to construct...

Can you help complete steam locomotive 4709?