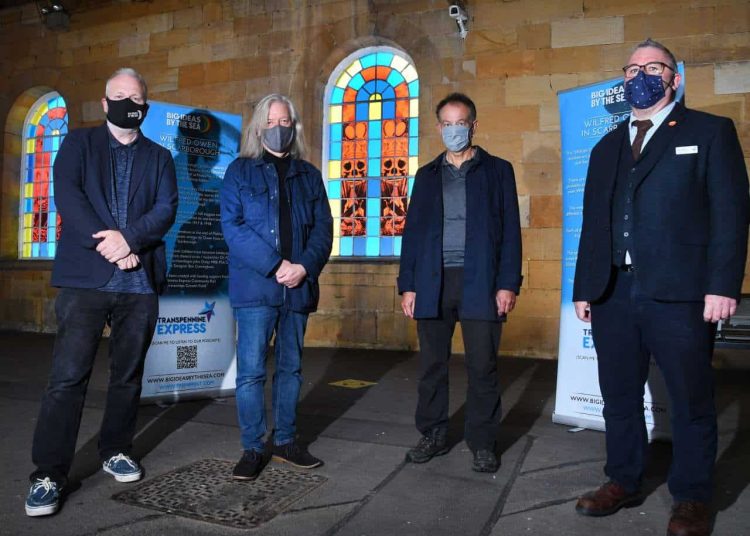 Train operator Transpennine Express has donated £10,000 from their Community Rail Partnership (CRP) Growth Fund, split equally between the Big Ideas By The Sea Festival and the Wilfred Owen windows at Scarborough railway station.

Passengers travelling to or from Scarborough station can now see the new artwork featured in the windows at the front of the station and the end of the platform.

The artwork honours war poet Wilfred Owen and is part of the Big Ideas By The Sea Festival which runs until the 24th of July.

The festival will bring speakers and performers from across the UK to discuss significant issues such as climate change, artificial intelligence, music, and history.

Featuring text and illustrations from five of Owen’s poems, the windows at the station are bright, colourful and translucent. Additionally, artwork displayed showcases portraits of Owen himself alongside his handwritten poems.

6 podcasts are available on the Big Ideas By The Sea Festival website, the first introduces Wilfred Owen’s history and was recorded on location at Scarborough station

Graham Meiklejohn, Regional Development Manager for TransPennine Express, said, “The Wilfred Owen window installation marks a fantastic moment for Scarborough as it prepares to host the Big Ideas By The Sea Festival. The designs are impressive, and we would like to thank the team for their hard work and dedication towards this project. Our Community Rail Partnership (CRP) Growth Fund helps enable projects or schemes to positively impact routes, including encouraging transfer between TPE services and those operated on CRP routes, such as the Esk Valley, Tyne Line, or the Yorkshire Coast. We are delighted to be able to help fund the inaugural Big Ideas By The Sea Festival.”

Kane Cunningham, Art Director and Big Ideas By The Sea Co-Director, said, “We are thrilled to be one of the winners of the CRP growth fund, with a proposal to focus on Wilfred Owen, who is widely regarded as Britain’s finest war poet. Owen’s father Tom worked for the railways, and in the early 1900s, the Owen family travelled to Scarborough on holiday. Owen also arrived by train when he was an Army Officer stationed in the town during World War One. Each window design is inspired by one of the many Owen poems written in Scarborough, and each expresses something personal about his months spent in this wonderful seaside town.”

Paul Elsam, Artist and Wilfred Owen scholar, added, “Wilfred Owen had a bit of a secret life in Scarborough, and it’s been fun working with the station windows to plant clues, then unpick them in podcasts. It’s especially exciting to share this with the public, whether they’re fans of Owen’s poetry or not.” To aid the movement of passengers, Network Rail are upgrading a bridge in Huddersfield.